The Perfectionists: How Precision Engineers Created the Modern World (Hardcover) 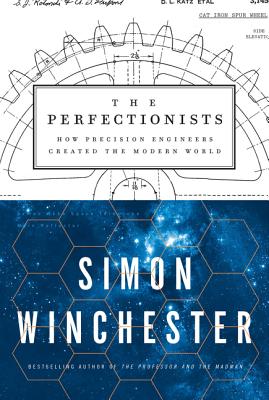 By Simon Winchester
$29.99
Not available to order.

“Another gem from one of the world’s justly celebrated historians specializing in unusual and always fascinating subjects and people.” — Booklist (starred review)

The revered New York Times bestselling author traces the development of technology from the Industrial Age to the Digital Age to explore the single component crucial to advancement—precision—in a superb history that is both an homage and a warning for our future.

The rise of manufacturing could not have happened without an attention to precision. At the dawn of the Industrial Revolution in eighteenth-century England, standards of measurement were established, giving way to the development of machine tools—machines that make machines. Eventually, the application of precision tools and methods resulted in the creation and mass production of items from guns and glass to mirrors, lenses, and cameras—and eventually gave way to further breakthroughs, including gene splicing, microchips, and the Hadron Collider.

Simon Winchester takes us back to origins of the Industrial Age, to England where he introduces the scientific minds that helped usher in modern production: John Wilkinson, Henry Maudslay, Joseph Bramah, Jesse Ramsden, and Joseph Whitworth. It was Thomas Jefferson who later exported their discoveries to the fledgling United States, setting the nation on its course to become a manufacturing titan. Winchester moves forward through time, to today’s cutting-edge developments occurring around the world, from America to Western Europe to Asia.

As he introduces the minds and methods that have changed the modern world, Winchester explores fundamental questions. Why is precision important? What are the different tools we use to measure it? Who has invented and perfected it? Has the pursuit of the ultra-precise in so many facets of human life blinded us to other things of equal value, such as an appreciation for the age-old traditions of craftsmanship, art, and high culture? Are we missing something that reflects the world as it is, rather than the world as we think we would wish it to be? And can the precise and the natural co-exist in society?

Simon Winchester is the acclaimed author of many books, including The Professor and the Madman, The Men Who United the States, The Map That Changed the World, The Man Who Loved China, A Crack in the Edge of the World, and Krakatoa, all of which were New York Times bestsellers and appeared on numerous best and notable lists. In 2006, Winchester was made an officer of the Order of the British Empire (OBE) by Her Majesty the Queen. He resides in western Massachusetts.

“Another gem from one of the world’s justly celebrated historians specializing in unusual and always fascinating subjects and people.” — Booklist (starred review)

Praise for The Men Who United the States: “Entertaining. . . . A pleasure.” — New York Times Book Review

“Simon Winchester never disappoints, and The Men Who United the States is a lively and surprising account of how this sprawling piece of geography became a nation. This is America from the ground up. Inspiring and engaging.” — Tom Brokaw

“A rousing tribute to the alliances, agencies, and inventions—from Lewis and Clark to the Internet—that underpin our more perfect union. A stunning, highly original feast of a book.” — Stacy Schiff, author of the Pulitzer Prize-winning Cleopatra

“[M]esmerizing and fascinating. . . . Mr. Winchester is a master storyteller, and all the individuals, places, and events that he passionately writes about come to life in exquisite detail.” — New York Journal of Books