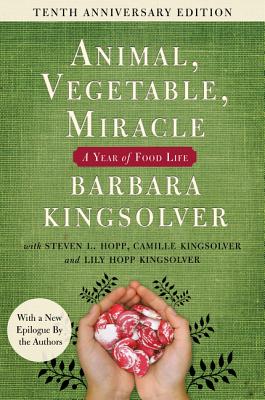 “A profound, graceful, and literary work of philosophy and economics, well tempered for our times, and yet timeless. . . . It will change the way you look at the food you put into your body. Which is to say, it can change who you are.” — Boston Globe

Since its publication in 2007, Animal, Vegetable, Miracle has captivated readers with its blend of memoir and journalistic investigation. Updated with original pieces from the entire Kingsolver clan, this commemorative edition explores how the family's original project has been carried forward through the years.

When Barbara Kingsolver and her family moved from suburban Arizona to rural Appalachia, they took on a new challenge: to spend a year on a locally-produced diet, paying close attention to the provenance of all they consume. Concerned about the environmental, social, and physical costs of American food culture, they hoped to recover what Barbara considers our nation's lost appreciation for farms and the natural processes of food production. Since 2007, their scheme has evolved enormously. In this anniversary edition, featuring an afterword by the entire Kingsolver family, Barbara's husband, Steven, discusses how the project grew into a farm-to-table restaurant and community development project training young farmers in their area to move into sustainable food production. Camille writes about her decision to move back to a rural area after college, and how she and her husband incorporate their food values in their lives as they begin their new family. Lily, Barbara's youngest daughter, writes about how growing up on a farm, in touch with natural processes and food chains, has shaped her life as a future environmental scientist. And Barbara writes about their sheep, and how they grew into her second vocation as a fiber artist, and reports on the enormous response they've received from other home-growers and local-food devotees.

With Americans' ever-growing concern over an agricultural establishment that negatively affects our health and environment, Animal, Vegetable, Miracle is a modern classic that will endure for years to come.

Barbara Kingsolver is the author of ten bestselling works of fiction, including the novels Unsheltered, Flight Behavior, The Lacuna, The Poisonwood Bible, Animal Dreams, and The Bean Trees, as well as books of poetry, essays, and creative nonfiction. Her work of narrative nonfiction is the influential bestseller Animal, Vegetable, Miracle: A Year of Food Life. Kingsolver’s work has been translated into more than twenty languages and has earned literary awards and a devoted readership at home and abroad. She was awarded the National Humanities Medal, our country’s highest honor for service through the arts, as well as the Dayton Literary Peace Prize for the body of her work. She lives with her family on a farm in southern Appalachia.

Camille Kingsolver graduated from Duke University in 2009 and currently works in the mental health field. She is an active advocate for the local-food movement, doing public speaking for young adults of her own generation navigating food choices in a difficult economy. She lives in Asheville, N.C., and grows a vegetable garden in her front yard.

Steven L. Hopp was trained in life sciences and received his PhD from Indiana University. He has published papers in bioacoustics, ornithology, animal behavior and more recently in sustainable agriculture. He is the founder and director of the Meadowview Farmers Guild, a community development project that includes a local foods restaurant and general store that source their products locally. He teaches at Emory & Henry College in the Environmental Studies department. He coauthored Animal, Vegetable, Miracle with Barbara Kingsolver and Camille Kingsolver.

“Charming...Literary magic...If you love the narrative voice of Barbara Kingsolver, you will be thrilled by her newest book...ANIMAL, VEGETABLE, MIRACLE is a fervent reminder of truths we blithely ignore.” — Houston Chronicle

“It’s a lovely book. One wants with all one’s heart to sit with [Kingsolver] on the porch at the end of the day and shell peas.” — Los Angeles Times

“Cogent and illuminating...There are many ways for a writer to tell you to eat your vegetables…Barbara Kingsolver’s way is both folksy and smart...Without sentimentality, this book captures the pulse of the farm and the deep gratification it provides, as well as the intrinsic humor of the situation.” — Janet Maslin, New York Times