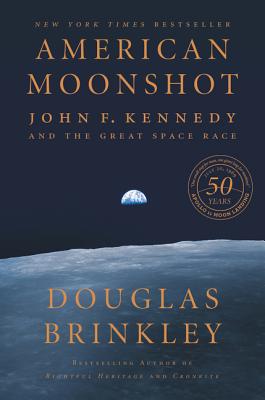 “We choose to go to the Moon in this decade and do the other things, not because they are easy, but because they are hard; because that goal will serve to organize and measure the best of our energies and skills, because that challenge is one that we are willing to accept, one we are unwilling to postpone, and one we intend to win.”—President John F. Kennedy

On May 25, 1961, JFK made an astonishing announcement: his goal of putting a man on the moon by the end of the decade. In this engrossing, fast-paced epic, Douglas Brinkley returns to the 1960s to recreate one of the most exciting and ambitious achievements in the history of humankind. American Moonshot brings together the extraordinary political, cultural, and scientific factors that fueled the birth and development of NASA and the Mercury, Gemini and Apollo projects, which shot the United States to victory in the space race against the Soviet Union at the height of the Cold War.

Drawing on new primary source material and major interviews with many of the surviving figures who were key to America’s success, Brinkley brings this fascinating history to life as never before. American Moonshot is a portrait of the brilliant men and women who made this giant leap possible, the technology that enabled us to propel men beyond earth’s orbit to the moon and return them safely, and the geopolitical tensions that spurred Kennedy to commit himself fully to this audacious dream. Brinkley’s ensemble cast of New Frontier characters include rocketeer Wernher von Braun, astronaut John Glenn and space booster Lyndon Johnson.

A vivid and enthralling chronicle of one of the most thrilling, hopeful, and turbulent eras in the nation’s history, American Moonshot is an homage to scientific ingenuity, human curiosity, and the boundless American spirit.

Douglas Brinkley is the Katherine Tsanoff Brown Chair in Humanities and Professor of History at Rice University, presidential historian for the New-York Historical Society, trustee of the Franklin D. Roosevelt Presidential Library, and a contributing editor at Vanity Fair. The Chicago Tribune dubbed him “America’s New Past Master.” He is the recipient of such distinguished environmental leadership prizes as the Frances K. Hutchison Medal (Garden Club of America), Robin W. Winks Award for Enhancing Public Understanding of National Parks (National Parks Conservation Association), and the U.S. Fish and Wildlife Service’s Lifetime Heritage Award. His book The Great Deluge: Hurricane Katrina, New Orleans, and the Mississippi Gulf Coast received the Robert F. Kennedy Book Award. He was awarded a Grammy for Presidential Suite and is the recipient of seven honorary doctorates in American studies. His two-volume, annotated Nixon Tapes recently won the Arthur S. Link–Warren F. Kuehl Prize. He lives in Austin, Texas, with his wife and three children.

“Brinkley’s story is a gripping one.... Rice University scholar and an agile and prolific historian and biographer, Brinkley is well-situated to tell this story… Brinkley sees an important poignancy, and he renders it with real power.” — Boston Globe

“A highly engaging history not just for space-race enthusiasts, but also students of Cold War politics….Prolific historian Brinkley avers that his latest is a contribution to “U.S. presidential history (not space studies).” However, in his customarily thorough way, it’s clear that he’s mastered a great deal of the fact and lore surrounding the Mercury, Gemini, and Apollo projects that landed American astronauts on the moon 50 years ago.” — Kirkus Reviews (starred review)

“At a time when national demoralization is so prevalent, Douglas Brinkley’s American Moonshot could not be more timely. His reconstruction of JFK’s bold commitment to space exploration and the heroic efforts of the men who made the “moonshot” a reality reminds us that America was and can be again a great principled nation that leads the world on to new frontiers.” — Robert Dallek, author of Franklin D. Roosevelt and An Unfinished Life: John F. Kennedy, 1917-1963

“An epic narrative: it is the sweeping story of how humankind’s impetus for space exploration evolved from the early visionaries in Russia, Germany, and the United States at the dawn of the 20th century through the scientific and technological achievements--albeit associated human horrors--of two world wars....a particularly intimate and fascinating read.” — James R. Hansen, author of  First Man: The Life of Neil A. Armstrong

“Prepare to recall what it was like to be inspired and thrilled by American greatness. Doug Brinkley recounts, with deep research and exciting narrative, the bold spirit and faith in innovation that was embodied in Kennedy’s decision to launch a mission to the moon. His vision restored a vitality to America, something we could use today.” — Walter Isaacson, author of Leonardo da Vinci

"The best new study of the American mission to space, rich in research and revelation." — New York Times Book Review

“Compelling and comprehensive….With a mixture of granular detail from a gigantic body of works on the subject and analyses of Kennedy’s decision-making and political savvy, American Moonshot transcends mere narrative to help the rest of us understand how America geared up for the astonishing feat of landing a man on the moon. With the approach of the 50th anniversary of Neil Armstrong’s ‘small step for man,’ Brinkley’s focus on the all-important early days provides a valuable perspective.” — Washington Post

“In an age when so little seems possible, Douglas Brinkley has taken us back to a moment when everything did. In telling the riveting story of John Kennedy and the race to the Moon, Brinkley explores the complexities of politics, diplomacy, technology, and, perhaps most important, of human nature itself. This is a great book.” — Jon Meacham, author of The Soul of America: The Battle for Our Better Angels

“Douglas Brinkley is not only a scholar, he’s a true storyteller. American Moonshot evokes and era, and brings to life the vivid personalities that accomplished one of the greatest feats in history.” — Lawrence Wright, author of God Save Texas: A Journey into the Soul of the Lone Star State

“American Moonshot is a thoroughly terrific work which should reach the widest possible audience. As a study in leadership, it is absolutely first rate. As history, it is inspiring and enthralling. And to cap it all, it is a completely riveting story about the Space Age.  I love this book.” — Doris Kearns Goodwin, author of the Pulitzer Prize-winning No Ordinary Time: Franklin and Eleanor Roosevelt: The Home Front During World War II