The Labyrinth of the Spirits: A Novel (Hardcover) 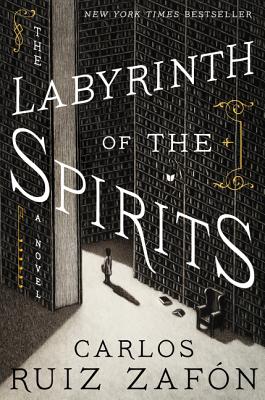 By Carlos Ruiz Zafon
Unavailable. Orders will be auto-cancelled.

“Zafón is one of my favorite authors of all time. I found his first book in the series, The Shadow of the Wind, years ago at an airport and was hooked forever; I have been entranced by the adventures of Daniel Sempere and Fermín and many others. In The Labyrinth of the Spirits, the horrors of the Spanish Civil War loom large over Daniel’s family and those he loves. And Alicia Gris — what a story she has to tell. In the midst of this violent time in Spanish history, the love that the characters have for each other shines bright. Through it all, Zafón shares magnificent tales about books, booksellers, authors, and life. This is a must-read!”
— Stephanie Crowe, Page and Palette, Fairhope, AL

The internationally acclaimed, New York Times bestselling author returns to the magnificent universe he constructed in his bestselling novels The Shadow of the Wind, The Angel’s Game, and The Prisoner of Heaven in this riveting series finale—a heart-pounding thriller and nail-biting work of suspense which introduces a sexy, seductive new heroine whose investigation shines a light on the dark history of Franco’s Spain.

In this unforgettable final volume of Ruiz Zafón’s cycle of novels set in the universe of the Cemetery of Forgotten Books, beautiful and enigmatic Alicia Gris, with the help of the Sempere family, uncovers one of the most shocking conspiracies in all Spanish history.

Nine-year-old Alicia lost her parents during the Spanish Civil War when the Nacionales (the fascists) savagely bombed Barcelona in 1938. Twenty years later, she still carries the emotional and physical scars of that violent and terrifying time. Weary of her work as an investigator for Spain’s secret police in Madrid, a job she has held for more than a decade, the twenty-nine-year old plans to move on. At the insistence of her boss, Leandro Montalvo, she remains to solve one last case: the mysterious disappearance of Spain’s Minister of Culture, Mauricio Valls.

With her partner, the intimidating policeman Juan Manuel Vargas, Alicia discovers a possible clue—a rare book by the author Victor Mataix hidden in Valls’ office in his Madrid mansion. Valls was the director of the notorious Montjuic Prison in Barcelona during World War II where several writers were imprisoned, including David Martín and Victor Mataix. Traveling to Barcelona on the trail of these writers, Alicia and Vargas meet with several booksellers, including Juan Sempere, who knew her parents.

As Alicia and Vargas come closer to finding Valls, they uncover a tangled web of kidnappings and murders tied to the Franco regime, whose corruption is more widespread and horrifying than anyone imagined. Alicia’s courageous and uncompromising search for the truth puts her life in peril. Only with the help of a circle of devoted friends will she emerge from the dark labyrinths of Barcelona and its history into the light of the future.

In this haunting novel, Carlos Ruiz Zafón proves yet again that he is a masterful storyteller and pays homage to the world of books, to his ingenious creation of the Cemetery of Forgotten, and to that magical bridge between literature and our lives.

Carlos Ruiz Zafón is the author of eight novels, including the internationally bestselling and critically acclaimed Cemetery of Forgotten Books series: The Shadow of the Wind, The Angel’s Game, The Prisoner of Heaven, and The Labyrinth of the Spirits. His work, which also includes prizewinning young adult novels, has been translated into more than fifty languages and published around the world, garnering numerous awards and reaching millions of readers. He lives in Los Angeles.

“A colossal achievement…a genre-crossing delight… Publishers dream of novels that appeal to habitual readers and to those seeking one big book to last a holiday, and that is what Zafon’s quartet has delivered. His trick is to have linked multiple genres – fantasy, historical, romance, meta-fictional, police-procedural and political – through prose of atmospheric specificity.”
— The Guardian

“Carlos Ruiz Zafon is a gifted storyteller who knows how to capture his readers’ attention. Packed with suspense, The Labyrinth of the Spirits is a gripping edge-of-your-seat thriller. As you read this chilling thriller, you feel as if your pounding heart is missing a beat.”
— Washington Book Review

“A mystery, a love letter to books, and a magical adventure all wrapped up in one, this book is a masterful work of literature that will invigorate your love of reading.”
— Bustle

“Ruiz Zafón clearly has had a great deal of fun in pulling this vast story together…His ability to keep track of a thousand threads while, in the end, celebrating the power of storytelling is admirable…. A satisfying conclusion to a grand epic that, of course, will only leave its fans wanting more.”
— Kirkus Reviews, Starred Review

“A compelling, multi-faceted, and haunting work of art told by a master storyteller. To say that the writing is brilliant is an understatement. Carlos Ruiz Zafón respects every word, taking his time to develop and do justice to the major, minor, and irrelevant characters, places, things, or situations in order to recreate a dark time in Spain’s history and ensure that the reader not only bears witness to it but is immersed in it and feels it…An epic novel that is also an ode to writing and to the undying thirst for knowledge through reading.”
— Historical Novel Society

“Gothic, operatic, and in many ways old-fashioned, this is a story about storytelling and survival, with the horrors of Francoist Spain present on every page. Compelling…this is for readers who savor each word and scene, soaking in the ambience of Barcelona, Zafón’s greatest character (after, perhaps, the irrepressible Fermín Romero de Torres).”
— Booklist

“It is a bittersweet return to Barcelona for fans of Zafón, as he concludes his internationally beloved, labyrinthine Cemetery of Forgotten Books series (The Shadow of the Wind, The Angel’s Game, The Prisoner of Heaven) with an operatic finale, drawing together all the threads as a rare book unveils a conspiracy that runs through Spanish history.”  “The  plot  is  exquisitely intricate, like an elaborate steampunk  timepiece.  Alicia, a fragile but ferociously formidable, vampire-like seductress,  is  unforgettable. The pacing is exceptional, with its incessant, rolling waves of tension. Even the dialogue is remarkably     sharp  and  fresh…The Labyrinth of the Spirits is a masterpiece…Readers’ one regret will be  that  Labyrinth is  the  last  in  this ingenious cycle.”
— BookPage

“THE LABYRINTH OF THE SPIRITS is the sublime culmination to a truly outstanding series. Set in Barcelona from 1938 through the 1970s, these books deftly combine the world of bookselling, the long shadow of the Spanish Civil War, gothic literary interplay, wonderfully salty characters, sublime dialogue and verbal sparring, along with elaborate and satisfying exposition. Taken together or individually they represent a reading experience not to be missed…reading Labyrinth first would have given a sublime insight into any of the other books…As long as you actually open a door to the labyrinth and enter it, all is well. As to not reading the Cemetery of Forgotten books at all, that is obviously a grave error.”

“Zafon’s vision is one of the complexity of human experience, reveling in language.”
— The Sydney Morning Herald

“Zafón is a master storyteller, combining the postmodern and the traditional in an enchanting hymn to literature…Magnificent…A dizzying tale of drama, intrigue and passion.”
— The Mail on Sunday (UK)