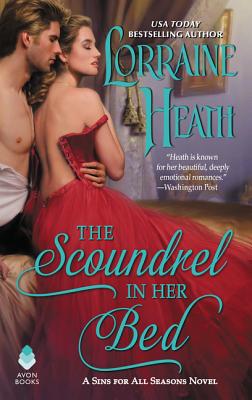 By Lorraine Heath
$7.99
Backordered. Place an order and we will let you know when to expect your book.

This is book number 3 in the Sins for All Seasons series.

The bastard son of a nobleman, Finn Trewlove was a shameful secret raised by a stranger. As Finn came of age, he had secrets, too—the clandestine nights spent with an earl’s daughter. But her promise of forever ended in betrayal.

Driven by a past that haunts her, Lady Lavinia Kent seeks redemption in London’s underworld, engaged in a daring cause inspired by the young man to whom she gave her innocence, and who then proved himself a scoundrel by abandoning her.

When their paths cross again, they can’t deny the yearning and desire that still burns. As they discover the truth behind the deceptions that tore them apart, Finn and Lavinia must fight to reclaim what they’ve lost, no matter how dangerous—because love is worth the risk . . .

Lorraine Heath always dreamed of being a writer. After graduating from the University of Texas, she wrote training manuals, press releases, articles, and computer code, but something was always missing. When she read a romance novel, she not only became hooked on the genre, but quickly realized what her writing lacked: rebels, scoundrels, and rogues. She’s been writing about them ever since. Her novels have been recognized with numerous industry awards and appeared on the USA Today and New York Times bestseller lists.

“RITA Award–winning Heath’s flair for stellar character development, exquisite use of sexual tension, and a story line that fluently incorporates Victorian history, in this case baby farming, into the plot all add up to another sure bet for fans new and old of this exemplary storyteller.”