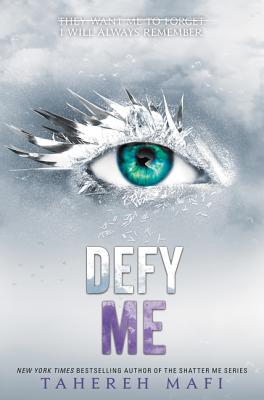 This is book number 5 in the Shatter Me series.

Juliette Ferrars isn’t who she thinks she is.

This time, she’s not alone. Stronger, braver, and more resilient than ever, Juliette will fight for life and love with her friends by her side—but first, she has to survive the war being waged against her mind:

Tahereh Mafi is the New York Times and USA Today bestselling author of the Shatter Me series, the National Book Award longlisted and bestselling novel A Very Large Expanse of Sea, as well as Furthermore and Whichwood. You can find her online just about anywhere @Tahereh or on her website, www.taherehmafi.com.

PRAISE FOR Defy Me: “Written with precision and a sense of urgency, each chapter a strobe light–like moment in the lives of the teens trying to save their world. The prose moves readers swiftly from crisis to crisis.”
— Booklist Online

“Unravel Me is dangerous, sexy, romantic, and intense. I dare you to stop reading.”
— Kami Garcia, #1 New York Times bestselling co-author of the Beautiful Creatures series

“Mafi combines a psychological opener with an action-adventure denouement in her YA debut. This is a gripping read from an author who’s not afraid to take risks.”
— Publishers Weekly

“Rip-roaring adventure and steamy romance scenes, with a relationship teens will root for as much as they did for Bella and Edward.”
— Booklist