Doctor Who: Dalek: The Astounding Untold History of the Greatest Enemies of the Universe (Hardcover) 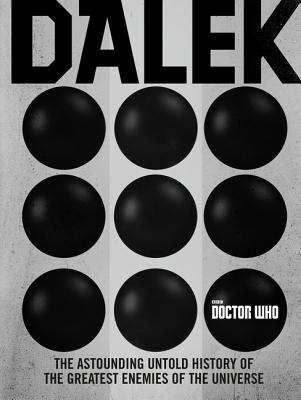 By George Mann, Justin Richards
$45.00
Not available to order.

For the first time, the never-before-told history of the Doctor’s most dangerous enemy, the Daleks, from their genesis thousands of years ago to their conquest of the universe.

Doctor Who: Dalek, is the one and only volume devoted solely to the history of the Doctor’s greatest enemy. The Daleks, with their watchword cry "Exterminate!", are a race of cyborg aliens single-mindedly determined to conquer the universe and end all life forms they consider inferior.

First appearing on Doctor Who in 1963, the Daleks are among the show’s most popular villains. Reminiscent of human-sized pepper shakers, the external mechanical casing of the Dalek protects a soft, repulsive creature whose electronic voice is reduced to a squeak when outside of its shell.

Doctor Who: Dalek chronicles the Daleks’ genesis through the Time War and their ongoing conquest of the universe. Here are never-before-told stories about these legendary creatures—including terrifying near-mythical adventures, startling visual recreations of secret conflicts, and more. Each story sheds new light on what has become the most feared alien race in the universe.

With a foreword by showrunner Steven Moffat, full-color illustrations, concept art, cutaways, diagrams, comic strips and more, Doctor Who: Dalek is the ultimate celebration of all things Dalek and a must have for devoted Whovians of every age.

Justin Richards has written for stage and screen as well as novels and graphic novels. He writes extensively for children and has also co-authored several action thrillers for young adults with the acknowledged master of the genre, Jack Higgins. The first two novels in his adult science fiction Never War series, The Suicide Exhibition and The Blood Red City, were published in 2013 and 2014, respectively. Justin acts as creative consultant to BBC Books' Doctor Who titles, and he has penned quite a few himself. Married with two children (both boys), Justin lives and works in Warwick, England, within sight of one of Britain's bestpreserved castles.