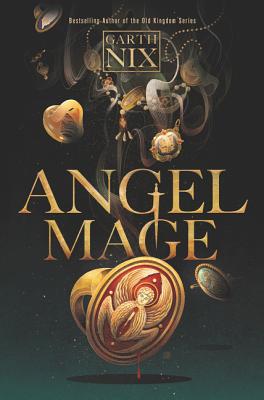 "In this rousing homage to The Three Musketeers from fantasy master Garth Nix, readers gain entry to an evocative world where angels lurk in the ether and their power can be channeled for mortal use ... at a price."

More than a century has passed since Liliath crept into the empty sarcophagus of Saint Marguerite, fleeing the Fall of Ystara. But she emerges from her magical sleep still beautiful, looking no more than nineteen, and once again renews her single-minded quest to be united with her lover, Palleniel, the archangel of Ystara.

It's a seemingly impossible quest, but Liliath is one of the greatest practitioners of angelic magic to have ever lived, summoning angels and forcing them to do her bidding. Four young people hold her interest: Simeon, a studious doctor-in-training; Henri, a dedicated fortune hunter; Agnez, a glory-seeking musketeer; and Dorotea, icon-maker and scholar of angelic magic.

The four feel a strange kinship from the moment they meet but do not suspect their importance. And none of them know just how Liliath plans to use them, as mere pawns in her plan, no matter the cost to everyone else . . .

Fans of Cassandra Clare, Holly Black, and Leigh Bardugo will fall in love with Angel Mage, a feminist fantasy that takes place in an alternate European world ruled by fearsome magic and deadly passions.

“Nix’s complex system of angelic magic, and the toll it takes, is fascinating, and he weaves an exciting adventure full of intrigue and action while portraying women in power in a refreshingly casual way. An original and gripping adventure.” — Kirkus Reviews (starred review)

“The vivid characters . . . jump off the pages. Their growing relationships steal the show. But there are plenty of embellishments that enhance the more personal aspects of the story. And kudos to fantasy stalwart Nix for a story with gender and racial equality.” — Booklist (starred review)

"A character-driven fantasy that still stays true its adventure roots. [with] thoughtful, complex world building. Well-wrought differences in the character and voice of those teens . . . add nuance and depth to their racial diversity, while the novel as a whole recasts angels and familiar characters alike in ways that play on gendered expectations. Overall, this is a captivating and memorable tale that will please longstanding Nix fans and other lovers of intelligently written fantasy." — Bulletin of the Center for Children’s Books

"With their complementary personalities and easy affection, the four friends are an endearing, sibling-like group; Liliath, &#8220ferociously single-minded,” makes a fascinating antagonist. . . . the pace picks up with plenty of court intrigue, beastling attacks, witty banter, and the posturing of rival military fac­tions. In addition to its fantastical elements, Nix’s setting is characterized by wel­come gender equality, orientation inclusivity, and racial diversity." — Horn Book Magazine

Praise for Goldenhand: “A masterfully spun tale well worth the years long wait.”

“Fans will cheer this latest volume- tightly paced with a satisfying resolution, capable and relatable female characters, plenty of action, and reappearances by beloved characters-and fervently hope for more to come.”

“Nix has included strong female characters and a no-nonsense approach to sexuality. Recommended for high school libraries and for readers looking for fantasy with a historical literary flair.” — School Library Journal

“There is no joy like returning to the Old Kingdom. Once again, Nix sets the standard for fantasy, bringing us a tale full of old friends and new enemies, gruesome monsters, and heroines of wit, will, and imagination.”

“Goldenhand reaffirms why Nix is a master of the genre: his exquisitely detailed world-building is unparalleled, and his characters are so tremendously alive and compelling that.”

“Garth Nix is one of the best worldbuilders in fantasy, and this book is merely further proof. I love the Old Kingdom series, and Goldenhand is an excellent continuation, packed with the excitement and passion of a storytelling virtuoso at the height of his abilities.” — Brandon Sanderson, New York Times bestselling author of the Mistborn trilogy, Warbreaker, The Alloy of Law, The Way of Kings, Rithmatist, and Steelheart.

Praise for the Old Kingdom series: Praise for Clariel: “Between striking characters-from the heroic if not entirely competent young Abhorsen-in-Waiting, Belatiel, to the enigmatic, catlike Mogget-and Nix’s brilliantly complex magic system, this superb tale is exactly the book fans of the series have been awaiting.”

“Themes of freedom and destiny underpin Clariel’s harrowing, bittersweet story, and readers will delight in the telling (and in fan favorite Mogget’s return).”

“Clariel is a deeply sympathetic character faced with complicated choices, the consequences of which are frighteningly uncertain as she is pulled between the wild Free Magic and the disciplined Charter.” — School Library Journal (starred review)

“Nix’s tale provides a complete experience unto itself. But his focus on this strong character whose overriding passion is to go her own way provides a hugely satisfying background to the other Abhorsen books. A suspenseful prequel to the much-loved Abhorsen books, showcasing the independent Clariel.”

Praise for SABRIEL: “Sabriel is a winner, a fantasy that reads like realism. Here is a world with the same solidity and four dimensional authority as our own, created with invention, clarity, and intelligence. I congratulate Garth Nix. And I look forward to reading his next piece of work.”

Praise for LIRAEL: “What makes Lirael a delight is the magic that Nix brings to his story and to his characters.”

“At once an allegory regarding war and peace and a testament to friendship, this is thought-provoking fantasy.”

“A swashbuckling adventure with lashings of swordplay, dastardly intrigue, and the most original magic I’ve seen in years.” — Joe Abercrombie, bestselling author of the First Law Trilogy