Don't Skip Out on Me: A Novel (Hardcover) 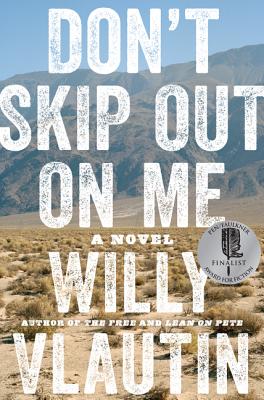 A FINALIST FOR THE PEN/FAULKNER AWARD

From Willy Vlautin,  award-winning author of Lean on Pete and The Motel Life, comes a powerful exploration of identity and loneliness pulled from deep within America's soul.

Don’t Skip Out On Me is going to make your heart crumple into a little wad of paper and then open it back up into a perfect paper airplane sailing the skies from the hand of a boy. How does a bi-cultural man find a self when he’s been abandoned by his parents? He invents it, that’s how, with his hands, his fists, and that fist-shaped muscle, a heart. No one anywhere writes as beautifully about people whose stories stay close to the dirt. Willy Vlautin is a secular—and thus real and profoundly useful—saint.”
—Lidia Yuknavitch, author of The Book of Joan

Horace Hopper has spent most of his life on a Nevada sheep ranch, but dreams of something bigger. Mr. and Mrs. Reese, the aging ranchers, took him in and treated him like a son, intending to leave the ranch in his hands. But Horace, ashamed not only of his half-Paiute, half-Irish heritage, but also of the fact his parents did not want him, feels as if he doesn’t belong on the ranch, or anywhere. Knowing he needs to make a name for himself, he decides to leave the only loving home he’s known to prove his worth as a championship boxer.

Mr. Reese is holding on to a way of life that is no longer sustainable. He’s a seventy-two-year-old rancher with a bad back. He’s not sure how he’ll keep things going without Horace but he knows the boy must find his own way.

To become a champion Horace must change not just the way he eats, trains, and thinks, but who he is. Reinventing himself as Hector Hildago, a scrappy Mexican boxer, he heads to Tucson and begins training and entering fights. His journey brings him to boxing rings across the Southwest and Mexico and finally, to the streets of Las Vegas, where Horace learns he can’t change who he is or outrun his destiny.

A beautiful, wrenching portrait of a downtrodden man, Don’t Skip Out on Me narrates the struggle to find one's place in a vast and lonely world with profound tenderness, and will make you consider those around you—and yourself—differently.

Willy Vlautin is the author of the novels The Motel Life, Northline, Lean on Pete, The Free, and Don’t Skip Out on Me. He is the founding member of the bands Richmond Fontaine and The Delines. He lives outside Portland Oregon.

“Vlautin. . . . strips away our defenses with close-to-the bone prose that leaves us utterly exposed to the tragedy of being alive—and every bit as thankful for those moments of aching humanity before the curtain falls.”
— Booklist (starred review)

“[T]here’s a distinct sense of foreboding in the air as Vlautin slowly lets this poignant tale unwind to its inevitable, heartbreaking conclusion. A powerful, haunting portrayal of lives rendered in unflinching, understated prose.”
— Kirkus Reviews

“An emotionally wrenching story of a ranch hand who dreams of being a championship boxer and an elderly couple trying to hold on in central Nevada.”
— Oregonian

“Vlautin writes with patience, tenderness, and a sharp eye toward the subtle things that can wear a person down — the fights we don’t know we’re losing until it’s already too late.”
— Los Angeles Review of Books

“Vlautin unerringly captures the heartbreak of the generational divide — as every older generation realizes it cannot protect its younger charges from making their own mistakes as they forge their own way.”
— Coast Weekend

“I absolutely loved Don’t Skip Out On Me, just as I have loved all of Vlautin’s previous novels. Vlautin’s gritty, scrappy world bursts with a tenderness that will hook you in from the first line to the last. This is a writer who should never be ignored.”
— Jessica Anya Blau, author of The Trouble with Lexie and Drinking Closer to Home

“No one anywhere writes as beautifully about people whose stories stay close to the dirt. Willy Vlautin is a secular—and thus real and profoundly useful—saint.”
— Lidia Yuknavitch, author of The Book of Joan

“Beautifully crushing and complete.”
— John Doe, author of Under the Big Black Sun and co-founder of X

“The world needs more Willy Vlautin, and Dont’ Skip Out on Me is his best novel yet.”
— Jonathan Evison, author of This is Your Life, Harriet Chance and The Revised Fundamentals of Caregiving