The School for Good and Evil #6: One True King (Hardcover) 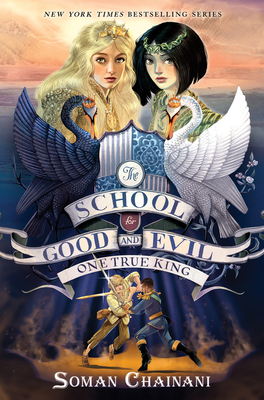 This is book number 6 in the School for Good and Evil series.

Soon to be a major motion picture from Netflix!

In this sixth and final installment in Soman Chainani’s New York Times bestselling epic fantasy fairy tale series, the School for Good and Evil, Camelot’s crown—and the fate of the Endless Woods—are up for grabs.

Beyond Good and Evil. Beyond Ever Afters. The tale of Sophie and Agatha comes to a dramatic conclusion. Prepare yourself for the End of Ends.

The first test was passed.

Excalibur pulled from the stone.

But two claim the crown.

The sword returns to the stone,

for only one is the true king.

The future I have seen has many possibilities…

So by my will, none shall be crowned until the Tournament is complete.

The Tournament of Kings.

A race to the finish.

Excalibur will crown the winner and take the loser's head.

Great for summer reading or anytime! A Today show pick for “25 children’s books your kids and teens won’t be able to put down this summer!"

Soman Chainani’s first six novels in the School for Good and Evil series each debuted on the New York Times bestseller list. The series has sold over 2.5 million copies, has been translated into 29 languages across six continents, and will soon be a major motion picture from Netflix.

A graduate of Harvard University and Columbia University’s MFA Film Program, Soman has made films that have played all over the world, and his writing awards include honors from Big Bear Lake, the CAPE Foundation, and the Sun Valley Writers’ Fellowship.

When he’s not telling stories, Soman is a die-hard tennis player who never lost a first-round match for ten years . . . until he started writing The School for Good and Evil. Now he loses all the time. You can visit Soman at www.somanchainani.com.

"Reimagines the world of fairy tales and will make you question who is good and who is evil. Loved it!" —Rick Riordan, author of the bestselling Percy Jackson series
— Rick Riordan

"The School for Good and Evil isn't just a fantasy series. It's a low-key empire." —NPR
— NPR

"Wow. From the very first sentence, you know you're entering a thrilling world of strange fantasy. A wild and dangerous fairy-tale rid. I loved this book." —R.L. Stine, author of the bestselling Goosebumps series
— R.L. Stine

"Invention in overdrive. The School for Good and Evil is a comedic education by a writer primed to shoot to the head of the class." —Gregory Maguire, author of the bestselling Wicked
— Gregory Maguire