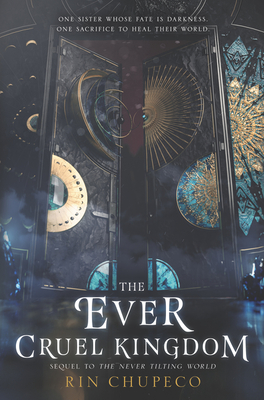 This is book number 2 in the Never Tilting World series.

From the author of The Bone Witch, the thrilling sequel to The Never Tilting World spins elemental magic, fierce sisterhood, and vast, incredible landscapes into a YA fantasy epic perfect for fans of Leigh Bardugo and Sabaa Tahir.

After a treacherous journey and a life-shattering introduction to a twin neither knew she had, sisters Haidee and Odessa expected to emerge from the Great Abyss to a world set right. But though the planet is turning once again, the creatures of the abyss refuse to rest without another goddess’s sacrifice.

To break the cycle, Haidee and Odessa need answers that lie beyond the seven gates of the underworld, within the Cruel Kingdom itself. The shadows of the underworld may hunger to tear them apart, but these two sisters are determined to heal their world—together.

Rin Chupeco has written obscure manuals for complicated computer programs, talked people out of their money at event shows, and done many other terrible things. They now write about ghosts and fantastic worlds but are still sometimes mistaken for a revenant. They are the author of The Girl from the Well, its sequel, The Suffering, and the Bone Witch trilogy. Find them at www.rinchupeco.com.

&#8220Dark and richly drawn, The Never Tilting World  is a lavish fantasy about sisterhood, sacrifice, and finding strength in a treacherous world. Chupeco’s writing is lushly descriptive, transporting me to the brink of the abyss; while reading it, I could swear the world stood still.” — Heidi Heilig, author of For a Muse of Fire