Never Look Back: A Novel (Paperback) 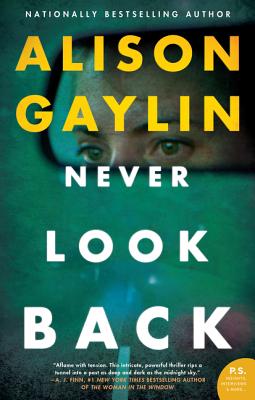 From the Edgar Award-winning author of If I Die Tonight

Reminiscent of the bestsellers of Laura Lippman and Harlan Coben—with a Serial-esque podcast twist—an absorbing, addictive tale of psychological suspense from the author of the highly acclaimed and Edgar Award-nominated What Remains of Me and the USA Today bestselling and Shamus Award-winning Brenna Spector series.

For thirteen days in 1976, teenage murderers April Cooper and Gabriel LeRoy terrorized Southern California's Inland Empire, killing a dozen victims before perishing themselves in a fire... or did they? More than 40 years later, twentysomething podcast producer Quentin Garrison blames his troubled upbringing on the murders. And after a shocking message from a source, he has reason to believe April Cooper may still be alive. Meanwhile, New York City film columnist Robin Diamond is coping with rising doubts about her husband and terrifying threats from internet trolls. But that's nothing compared to the outrageous phone call she gets from Quentin... and a brutal home invasion that makes her question everything she ever believed in. Is Robin's beloved mother a mass murderer? Is there anyone she can trust?

Told through the eyes of those destroyed by the Inland Empire Killings—including Robin, Quentin, and a fifteen-year-old April Cooper—Never Look Back asks the question:

How well do we really know our parents, our partners—and ourselves?

“Nothing is as it seems in Gaylin’s addictive, shape-shifting thriller... a twisty-turny plot that will sizzle your summer.” — People, Included in “The Best New Books”

“Expertly crafted… A mind-bending mystery, an insightful exploration of parent-child relationships, and a cautionary tale about bitterness and blame.” — Kirkus Reviews (starred review)

“Alison Gaylin’s 11th novel perceptively examines family dynamics, the domino effects of violence and our personal stories—real or invented—that help us maneuver through life. The strong tension that launches Never Look Back only intensifies with each surprising twist… Never Look Back is another superior outing from Gaylin.” — Associated Press

“An addictive and complex tale related through the experiences of April, Quentin, and Robin, with multiple startling conclusions.” — Booklist

“Moody, densely layered mystery whose emotional notes are as affecting as the plot points are enthralling…a model of superb narrative craft.” — Los Angeles Review of Books

“Her latest release, Never Look Back, is not only her best novel yet, but also one of the best novels of the year-to-date, period.” — BOLO Books Review

“Right now, Alison Gaylin is at the very top of her game, crafting exhilarating and audacious crime novels that are both rich in character and rivetingly told. Her books are, quite simply, not to be missed.” — Megan Abbott, Edgar Award-winning author of Dare Me and The Fever

“New Alison Gaylin is a good reason to set everything aside and give yourself wholly to what promises to be a psychologically riveting and suspenseful read... It’s a fascinating, fresh, and intoxicating thriller about motherhood, truth, and the mysteries that shroud those closest to us.” — source to follow

“Never Look Back asks us to be unafraid to look deeper, to believe in the healing power of the truth, and to accept the consequences and be good to ourselves regardless.” — source to follow