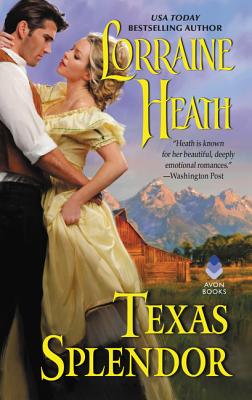 After five grueling years in a Texas prison, Austin Leigh is finally a free man. He can’t wait to go home and be reunited with his sweetheart. But when he discovers she didn’t wait for him and is now married, he becomes more determined to clear his name of the crime he never committed.

Meets the one woman who could offer him salvation—and love . . .

En route to the state capital, he meets a young woman, Loree Grant, and her dog. When he learns that they have survived a mysterious tragedy, he is moved—and curious. And as he spends more time with the lovely, intriguing woman, he sees glimpses of a future he had thought was no longer possible as they both find a new lease on life—and a love that can overcome any obstacle . . .

Lorraine Heath always dreamed of being a writer. After graduating from the University of Texas, she wrote training manuals, press releases, articles, and computer code, but something was always missing. When she read a romance novel, she not only became hooked on the genre, but quickly realized what her writing lacked: rebels, scoundrels, and rogues. She’s been writing about them ever since. Her work has been recognized with numerous industry awards, including RWA’s prestigious RITA®. Her novels have appeared on the USA Today and New York Times bestseller lists.