When the Men Were Gone: A Novel (Large Print / Paperback) 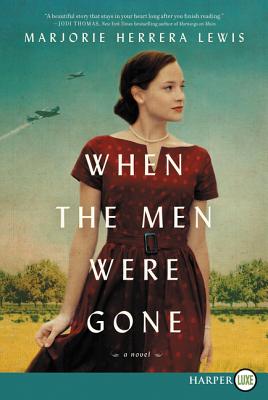 By Marjorie Herrera Lewis
$19.99
Backordered. Place an order and we will let you know when to expect your book.

“…Sublimely ties together the drama of high school football, gender politics, and the impact of war on a small town in Texas.” – Sports Illustrated

A cross between Friday Night Lights and The Atomic City Girls, When The Men Were Gone is a debut historical novel based on the true story of Tylene Wilson, a woman in 1940's Texas who, in spite of extreme opposition, became a female football coach in order to keep her students from heading off to war.

Football is the heartbeat of Brownwood, Texas. Every Friday night for as long as assistant principal Tylene Wilson can remember, the entire town has gathered in the stands, cheering their boys on. Each September brings with it the hope of a good season and a sense of unity and optimism.

Now, the war has changed everything.  Most of the Brownwood men over 18 and under 45 are off fighting, and in a small town the possibilities are limited. Could this mean a season without football? But no one counted on Tylene, who learned the game at her daddy’s knee. She knows more about it than most men, so she does the unthinkable, convincing the school to let her take on the job of coach.

Faced with extreme opposition—by the press, the community, rival coaches, and referees and even the players themselves—Tylene remains resolute. And when her boys rally around her, she leads the team—and the town—to a Friday night and a subsequent season they will never forget.

Based on a true story, When the Men Were Gone is a powerful and vibrant novel of perseverance and personal courage.

Marjorie Herrera Lewis knew early on she wanted a career related to sports. After several years at small newspapers, at age twenty-seven she began working at the Fort Worth Star-Telegram. Soon after, she was named a beat writer for the Dallas Cowboys and eventually joined the Dallas Morning News sportswriting staff. While writing When the Men Were Gone, she became inspired to try her hand at coaching football and was added to the Texas Wesleyan University football coaching staff. She presently teaches media ethics at the University of North Texas. When the Men Were Gone was the winner of the Best Book - New Fiction and Best Book - Historical Fiction Awards from the American Book Fest and was a finalist for the New Mexico-Arizona Best Book Awards.

“A beautiful story that stays in your heart long after you finish reading When the Men Were Gone. A delightful true story, well written and touching.  Looking forward to reading many more books by Lewis.”
— Jodi Thomas, New York Times bestselling author of Mornings on Main.

“...WHEN THE MEN WERE GONE sublimely ties together the drama of high school football, gender politics and the impact of war on a small town in Texas.”
— Sports Illustrated

“Marjorie has written a wonderfully touching and beautiful story […] Tylene makes me laugh, cry, and cheer for her in ways I have not done in a long time. I only wish the real Tylene were here to see what Marjorie has accomplished. I was literally having chills. I look forward to the day her book launches into the world!”
— Diane Les Becquets, bestselling author of Breaking Wild

“Marjorie Herrera Lewis has a great knack for storytelling. Clear cinematic scenes with dialogue and clear motivation and suspense.”
— Mark Sundeen, author of The Man Who Quit Money

“A feel-good story about one woman’s persistence, strength, and love of the game.”
— Kirkus Reviews

“Tylene’s struggles, on and off the field, form the core of this satisfying historical novel based on a true story.”
— Booklist