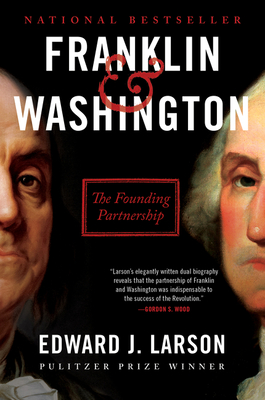 "Larson's elegantly written dual biography reveals that the partnership of Franklin and Washington was indispensable to the success of the Revolution." —Gordon S. Wood

Theirs was a three-decade-long bond that, more than any other pairing, would forge the United States. Vastly different men, Benjamin Franklin—an abolitionist freethinker from the urban north—and George Washington—a slavehold­ing general from the agrarian south—were the indispensable authors of American independence and the two key partners in the attempt to craft a more perfect union at the Constitutional Convention, held in Franklin’s Philadelphia and presided over by Washington. And yet their teamwork has been little remarked upon in the centuries since.

Illuminating Franklin and Washington’s relationship with striking new detail and energy, Pulitzer Prize–winning historian Edward J. Larson shows that theirs was truly an intimate working friendship that amplified the talents of each for collective advancement of the American project.

After long sup­porting British rule, both Franklin and Washington became key early proponents of inde­pendence. Their friendship gained historical significance during the American Revolution, when Franklin led America’s diplomatic mission in Europe (securing money and an alliance with France) and Washington commanded the Continental Army. Victory required both of these efforts to succeed, and success, in turn, required their mutual coordination and cooperation. In the 1780s, the two sought to strengthen the union, leading to the framing and ratification of the Constitution, the founding document that bears their stamp.

Franklin and Washington—the two most revered figures in the early republic—staked their lives and fortunes on the American experiment in liberty and were committed to its preservation. Today the United States is the world’s great super­power, and yet we also wrestle with the government Franklin and Washington created more than two centuries ago—the power of the executive branch, the principle of checks and balances, the electoral college—as well as the wounds of their compromise over slavery. Now, as the founding institutions appear under new stress, it is time to understand their origins through the fresh lens of Larson’s Franklin & Washington, a major addition to the literature of the founding era.

EDWARD J. LARSON is University Professor of History and holds the Hugh & Hazel Darling Chair in Law at Pepperdine University. His numerous awards and honors include the Pulitzer Prize for History.

"In 1790, John Adams joked that the history of the Revolution would eventually boil down to Washington and Franklin doing pretty much everything. This was not as much of a joke as Adams imagined: Edward J. Larson's elegantly written dual biography reveals that the partnership of Franklin and Washington was indispensable to the success of the Revolution." — Gordon S. Wood, winner of the Pulitzer Prize for History and the Bancroft Prize, and author of Revolutionary Characters and Empire of Liberty

“Franklin & Washington does ample justice to its subjects’ achievements. ... Larson lays down a pairing that has hitherto been neglected. Few would quibble with Mr. Larson’s verdict that George Washington and Benjamin Franklin rank as the pre-eminent Founders: Without the former’s determined leadership of the Continental Army during the Revolutionary War and the latter’s assiduous cultivation of the French support that ultimately secured victory, there would be no United States." — Stephen Brumwell, Wall Street Journal

“America has always been a team project, and its Founding co-captains are Benjamin Franklin and George Washington.  But until now, curiously, there has not been a joint biography worthy of these two great Captains America. Edward J. Larson finally delivers just what we need: a crisp narrative crackling with great stories and deep insights.  Equally fun and wise—a rare combination—Franklin & Washington is an indispensable book about our two indispensable Founding Fathers.” — Akhil Reed Amar, Sterling Professor of Law and Political Science, Yale University, and author of America's Constitution: A Biography

“Larson brings together the lives of these titans, showing how their backgrounds and joint interests made them ideal partners. … An inspired approach for considering the lives and legacies of these two founding fathers.” — Booklist, STARRED Review

"Larson presents a concise yet engaging narrative that illuminates how individuals can have as much impact on events as broader societal or economic forces." — USA Today