Titan and the Wild Boars: The True Cave Rescue of the Thai Soccer Team (Hardcover) 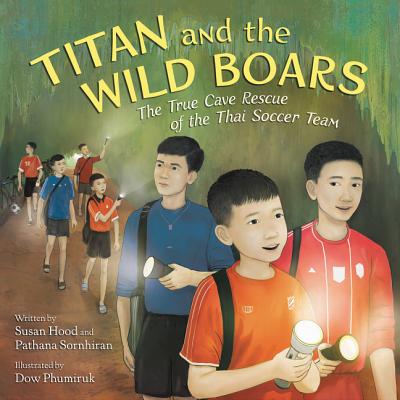 Don’t miss the breathtaking true story of the international rescue of the Wild Boars soccer team from a flooded cave in Thailand! This nonfiction picture book is an excellent choice to share during homeschooling, in particular for children ages 4 to 6. It’s a fun way to learn to read and as a supplement for activity books for children.

One afternoon, eleven-year-old Titan, his friends from the Wild Boars soccer team, and their coach rode their bikes to explore local caves. They crawled through the narrow tunnels in the dark to reach the center of the cave. When they turned to go home, heavy rains had flooded the tunnel. They were trapped!

With rising waters and monsoon season upon them, time and oxygen were running out. The world watched with bated breath as rescuers from around the globe joined forces to try to free the boys. After eighteen harrowing days, in an unprecedented effort of international teamwork, they were finally saved.

Award-winning author Susan Hood and journalist Pathana Sornhiran based this picture book on Sornhiran’s first-hand reporting of the event, and Dow Phumiruk’s beautiful illustrations bring the story to life. The book also includes a timeline and back matter with additional resources.

Susan Hood is the award-winning author of many books for young readers, including Alias Anna, Lifeboat 12, Ada’s Violin, Brothers in Arms, The Last Straw: Kids vs. Plastics, Shaking Things Up, and Titan and the Wild Boars. She is the recipient of an E. B. White Read-Aloud Picture Book Honor, the Christopher Award, the Américas Award for Children’s and Young Adult Literature, the Golden Kite Award, and the Bank Street Flora Stieglitz Straus Award, given annually for “a distinguished work of nonfiction.” Visit her at susanhoodbooks.com.

Dow Phumiruk was born in Bangkok, Thailand, and came to live in the United States when she was about three years old. She loves children and sharing stories. Dow has been a member of the Society of Children's Book Writers and Illustrators since 2011. She’s the author of picture book Mela and the Elephant and the illustrator of Counting on Katherine: How Katherine Johnson Saved Apollo 13. She also illustrated Maya Lin: Artist-Architect of Light and Lines, which received starred reviews, was a Junior Library Guild Selection, and was featured on many best books of 2017 round-ups. Dow is a pediatrician who lives with her husband and children in Colorado. They own a dwarf rabbit, a bearded dragon, and a chubby hamster.

Pathana Sornhiran was born in Bangkok, Thailand, where she attended the Faculty of Arts at Chulalongkorn University, majoring in English and French. She later completed her master's degree in journalism in London, and she now works as a journalist in Asia, traveling across the region to find and tell stories that matter.