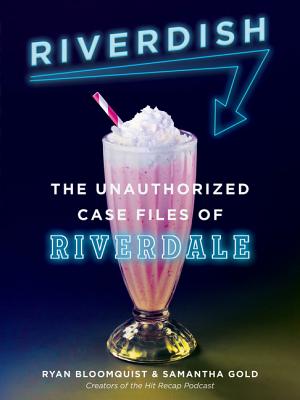 From the hosts of the Riverdish podcast, the unauthorized case files from the world of the CW’s teen drama sensation Riverdale.

For Archie Andrews, Veronica Lodge, Jughead Jones, and Betty Cooper, high school is more than just pep rallies and milkshakes. Based on the beloved characters from the Archie Comics, Riverdale is a dark, addictive, campy teen thriller that devilishly mixes adolescent angst with corruption, politics, serial killers, gang wars, and twisted secrets. The emotional exploits of Archie, Veronica, Jughead, Betty, and their friends and foes have riveted fans across generations and catapulted the teen drama series into an iconic cultural phenomenon spawning internet discussion groups and podcasts.

One such podcast is Riverdish, hosted by the adoring and enthusiastic Ryan and Sam, and they have taken it upon themselves to complete the complicated and necessary task of creating the essential unauthorized case files on Riverdale's twisted web of lies, crimes and mysteries.

Featuring case files on Riverdale’s beloved ensemble cast of Archie, Veronica, Jughead, Betty and their friends and foes, Riverdish offers up comprehensive breakdowns of the many mysteries and crimes that plague the town of Riverdale, paired with laugh-out-loud commentary and photos from behind-the-scenes of the show. Tackling everything from The Black Hood to Jingle Jangle to the Southside Serpents to bogus FBI agents and everything and everyone in between, Riverdish is an insightful and hilarious sendup of the case files that the authorities should use to track the many twists and turns of the show.

With a deep knowledge of and appreciation for the show and all that makes it iconic, Riverdish dissects and celebrates the dramatic and thrilling darkness of Riverdale.

Ryan Bloomquist is an actor and vocalist based out of New York City. He is a graduate of New York University’s Tisch School of the Arts and has appeared regionally in shows all over the country. Most days he can be found spending far too much time on Twitter (@ryanbloomquist) and falling down deep YouTube rabbit holes of amateur productions of Legally Blonde: The Musical. He lives in New York City.

Samantha Gold is a talent manager and producer. Her work encompasses film and television production, live events, talent wrangling, documentary editing, and podcasting. She previously worked at E! News and Creative Artists Agency. She did not direct Fun Home on Broadway. She lives in New York City.