Superpower Showdown: How the Battle Between Trump and Xi Threatens a New Cold War (Hardcover) 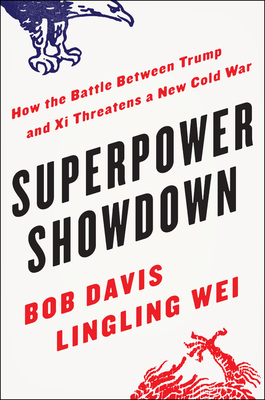 By Bob Davis, Lingling Wei
$32.50
Not available to order

This is the inside story of the US–China trade war, how relations between these superpowers  unraveled, darkening prospects for global peace and prosperity, as told by two Wall Street Journal reporters, one based in Washington, D.C., the other in Beijing, who have had more access to the decision makers in the White House and in China’s Zhongnanhai leadership compound than anyone else.

The trade battle between China and the U.S. didn’t start with Trump and won’t end with him, argue Bob Davis and Lingling Wei. The two countries have a long and fraught political and economic history which has become more contentious over the past three years—an escalation that has negatively impacted both countries' economies and the world at large—and holds the potential for even more uncertainty and disruption.

How did this stand-off happen? How much are U.S. presidents and officials who haven't effectively confronted or negotiated with China to blame? What role have Chinese leaders, and U.S. business leaders who for decades acted as Beijing’s lobbyists in Washington, played in driving tensions between the two countries?

Superpower Showdown is the story of a romance gone bad. Uniquely positioned to tell the story, Davis and Wei have conducted hundreds of interviews with government and business officials in both nations over the seven years they have worked together writing for the Wall Street Journal. Analyzing U.S.–China relations, they explain how we have reached this tipping point, and look at where we could be headed. Vivid and provocative, Superpower Showdown will help readers understand the context of the trade war and prepare them for what may come next.

Bob Davis is a Pulitzer Prize-winning senior editor covering economic issues at the Wall Street Journal’s Washington D.C. bureau, and continues to write about China, where he was posted from 2011 to 2014. He has served as the Journal’s bureau chief in Brussels covering the European Union, and as the Latin America bureau chief. He lives in Washington, D.C.

Lingling Wei is an award-winning senior China correspondent, who was based in the Wall Street Journal’s Beijing bureau from 2011 until China expelled Journal reporters in the spring of 2020. Hailing from a farm province in southeastern China, she came of age as a journalist in New York and then returned to China in early 2011 to report on changes in her homeland. She is now based in New York and focuses on the intersection of Chinese politics and the economy.

"This is essential reading for anyone concerned about America’s economic future."
— Publishers Weekly (starred review)

"'We hope this book provides the material to understand what happened and why,' the authors conclude. Mission accomplished."
— Kirkus Reviews

"A must-read for anyone interested in what happened between China and the United States, likely the world’s most important economic relationship."
— Forbes

If you've ever wished you were a fly on the wall as top leaders in the U.S. and China were considering how to parry their counterparts' most recent moves, here's your big chance. . . . The book starts out with an incredible reveal, at least for those of us who have watched China for years . . . (No spoilers: Go read the book to find out!)
— Axios

"Superpower Showdown, a gripping and granular account of the past, present and future of the United States-China trade war by two former Beijing correspondents of the Wall Street Journal, could just as well have been titled Marriage Story. . . . There are perhaps no two journalists better placed to tell this tale. . . . The strength of this book lies in the rich perspectives it offers from both Washington and Beijing, presenting a clear insight into the decision-making of both parties."
— The Hindu

"Davis and Wei provide an essential overview of how the United States and China became so entwined, and the challenges ahead. . . . Superpower Showdown is especially insightful on how the contradictory natures of Trump and Xi have impeded understanding."
— Boston Globe

"[A] well-reported and fascinating look into Sino-American economic relations . . . The most compelling parts of the book report on what the negotiators and policymakers on both sides were thinking before striking a deal in January 2020."
— American Enterprise Institute

“My first advice to the Biden administration on trade and particularly our relationship with China is that they need to get and study copies of Superpower Showdown, a book by Davis and Wei that describes the environment with China—that we are now experiencing an era of confrontation.”
— Josh Bolten, President and CEO of Business Roundtable, former White House chief of staff to President George W. Bush