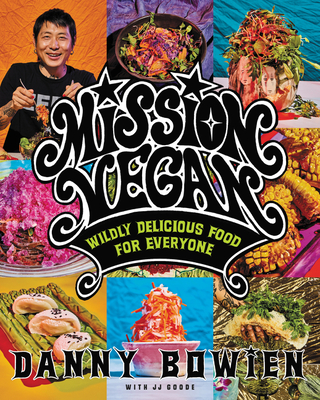 From the author of The Mission Chinese Food Cookbook, a fresh take on vegan cooking that emphasizes freewheeling exploration and big flavor

As cofounder and chef of the famous Mission Chinese Food restaurants in San Francisco and New York, Danny Bowien has a reputation for inventive meat dishes like Chongqing Chicken Wings and Kung Pao Pastrami. Yet eight years ago, he became a dad, got sober, and quietly began to train his gift for creating exhilarating food on meat-free, dairy-free dishes. Soon, much of the Mission menu was vegan—not that anyone noticed. They were too busy eating it up.

That’s the kind of food you’ll find in Mission Vegan: fun, original, wildly flavorful dishes that’ll thrill devotees of Danny’s lamb ma po tofu, lifelong vegans, and everyone in between. His approach reflects the same “uniquely American” perspective--a blend of his particular upbringing and his boundless curiosity and enthusiasm--that has made him one of the country’s most influential chefs. It all adds up to a book where pasta pomodoro shares a chapter with chewy Korean buckwheat noodles topped with neon-pink dragonfruit ice; where one fried rice is inspired by veggie sushi hand rolls and another is a mash-up of his favorite Thai takeout and Jose Andres’ Spanish tortilla; and where kimchi is made kaleidoscopically with habanero, with pineapple, and with the seasoning packets from instant ramen.

And while these are all dishes that have appeared, or could appear, on Mission’s menu, the recipes are all geared for the home cook, delivering restaurant-quality impact without restaurant-level effort. Keeping the emphasis on the fun of cooking and experimenting in the kitchen, Mission Vegan represents a journey-in-progress, a chef’s mission to find inspiration, joy, and flavor in food, no matter where life takes you.

Danny Bowien is the cofounder of Mission Chinese Food in San Francisco and New York. He won the 2008 Pesto World Championship in Genoa, Italy, the James Beard Foundation for Rising Star Chef in 2013, and the main subject of the sixth season of the travel and food show The Mind of a Chef. He was born in Korea, raised in Oklahoma, and lives in New York, where he is the chef at Mission in Bushwick, Brooklyn.

JJ Goode, co-writer, has co-authored several New York Times bestselling cookbooks and has won a James Beard Award. The editors of The Norton Reader selected his Gourmet magazine essay on cooking with one arm for their anthology of nonfiction, which includes writing from Nora Ephron, Barack Obama, and Jesus.

"Danny Bowien combines Korean influences and his own flair for the dramatic in this innovative collection of vegan delights. . . . There are plenty of spicy recipes that turn up the heat, but Bowien also excels in showcasing subtler flavors, too. . . . Mixing bold ingredients and techniques, this enthralling collection will satisfy vegans and carnivores alike." — Publishers Weekly (starred review)