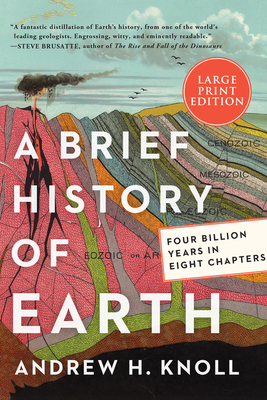 “A sublime chronicle of our planet." –Booklist, STARRED review

How well do you know the ground beneath your feet?

Odds are, where you’re standing was once cooking under a roiling sea of lava, crushed by a towering sheet of ice, rocked by a nearby meteor strike, or perhaps choked by poison gases, drowned beneath ocean, perched atop a mountain range, or roamed by fearsome monsters. Probably most or even all of the above.

The story of our home planet and the organisms spread across its surface is far more spectacular than any Hollywood blockbuster, filled with enough plot twists to rival a bestselling thriller. But only recently have we begun to piece together the whole mystery into a coherent narrative. Drawing on his decades of field research and up-to-the-minute understanding of the latest science, renowned geologist Andrew H. Knoll delivers a rigorous yet accessible biography of Earth, charting our home planet's epic 4.6 billion-year story. Placing twenty first-century climate change in deep context, A Brief History of Earth is an indispensable look at where we’ve been and where we’re going.

Andrew H. Knoll is the Fisher Professor of Natural History at Harvard University. His honors include the International Prize for Biology, the Charles Doolittle Walcott and the Mary Clark Thompson Medals of the National Academy of Sciences, the Paleontological Society Medal, and the Wollaston Medal of the Geological Society of London. For nearly two decades he served on the science team for NASA’s Mars Exploration Rover mission. Knoll is also the author of Life on a Young Planet, for which he received the Phi Beta Kappa Book Award in Science.

“A fantastic distillation of Earth's history, from one of the world’s leading geologists: Andrew H. Knoll has written an engrossing, witty, and eminently readable romp through our home planet’s 4.5 billion years, from trilobites and dinosaurs to human origins and our rapidly changing modern times.” — Steve Brusatte, New York Times bestselling author of The Rise and Fall of the Dinosaurs

"Having spent decades at the forefront of discovery and research, Andrew H. Knoll has been one of our planet's leading scientists. In A Brief History of Earth, Knoll treats us to a 4.6-billion-year detective story revealing the origins and inner workings of our home in the solar system.  In these pages you'll discover something profound: how our past, present, and future are grounded in Planet Earth." — Neil Shubin, author of Your Inner Fish and Some Assembly Required

"Covers the arc of our planet’s history from its earliest formation to the present day in a succinct and deftly-written way." — Forbes

“Charts the planet’s history in accessible style, from its beginning as ‘a small planet accreted out of rocky debris circling a modest young star’ through the development of minerals, geographical formations, atmosphere, and life forms large and small.”  — Associated Press

"A sublime chronicle of our planet’s formation and beginnings, the perhaps unlikely yet awe-inspiring interactions that created life, diverse and abundant, and mass extinctions and recoveries. Knoll skillfully presents the extreme conditions, violence, and delicate fragility that mark the cycles and evolution of our home." — Booklist (starred review)

"The type of book that is sorely needed at this moment in history. ... Knoll assembles facts from a wide variety of fields to tell our planet’s story in a clear and accessible narrative." — Scientific Inquirer

“An eloquent call to action.”  — CNN.com

"In spite of its sweeping scale, the Harvard geologist and natural history professor’s primer not only makes the titular four billion years understandable – his accessible expertise makes it interesting."