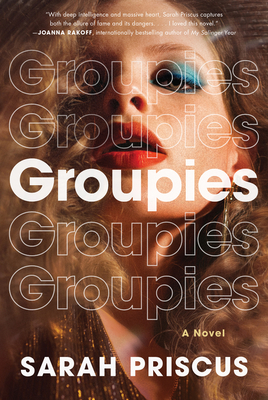 "What a thrill it is to read Sarah Priscus’ 70s rock, California-dreaming Groupies. This shimmering debut is packed with tenderness and awe against a backdrop of drugs, sex, rock stars, and high drama. Faun is a lovable, believable, and wonderfully drawn character who will remain in my heart and mind for a very, very long time." — Jessica Anya Blau, author of Mary Jane

In a debut perfect for fans of Daisy Jones & The Six, Mary Jane, and The Final Revival of Opal & Nev, Sarah Priscus shines a bright light on the grungy yet glittery world of 1970s rock 'n' roll and the women – the groupies – who unapologetically love too much in a world that doesn’t love them back.

After her mother’s death, Faun, a naïve college dropout, grabs her Polaroid and hops a Greyhound to Los Angeles. In the City of Angels, she reconnects with her charismatic childhood friend Josie, now an up-and-coming model and muse. To make their reunion even sweeter, Josie is now dating Cal Holiday, the frontman of the superstar rock band Holiday Sun, and Faun is positively mesmerized.

Except it’s not just the band she can’t get enough of. It’s also the proud groupies who support them in myriad ways. Among the groupies are: a doting high school girl at war with her mother; a drug-dealing wife and new mom who longs to be a star herself; and a cynical mover-and-shaker with a soft spot for Holiday Sun’s bassist.

Faun obsessively photographs every aspect of this dazzling new world, struggling to balance her artistic ambitions with the band’s expectations. As her confidence grows for the first time in her life, her priorities shift. She becomes reckless with friendship, romance, her ethics, and her bank account.

But just as everything is going great and her boring, old life is falling away, Faun realizes just how blind she has been to the darkest corners of this glamorous musical dreamland as the summer heats up and everything spirals out of control . . .

Equal parts an evocative coming-of-age and a cutting look at fame, desire, and the media, Groupies is a novel that will have you turning the pages until the music- and drug-fueled end.

Sarah Priscus is a Canadian writer. A graduate of the University of Ottawa, her short stories and poetry have been published online in journals including Barren Magazine, New South Journal, Ellipsis Zine, and Milk Candy Review. Her story “[saxophone solo]” appeared in Bone & Ink Press's 2019 anthology Shut Down Strangers and Hot Rod Angels. She received a Best of the Net nomination for a story published in Atlas & Alice, and a Pushcart Prize nomination.

Groupies is her debut novel.

"Priscus’ audacious debut totally rocks—and rolls—in a dazzling story of groupies, and the young woman who is as obsessed with them as she is with grabbing her own star... A devastatingly on-target story about the cost of fame, desire, and drugs... The novel itself is nothing short of superstar." — Caroline Leavitt, New York Times bestselling author of With or Without You

"This dark, absorbing coming-of-age tale, set in the folk-rock scene of the 1970s, captivated me from the very first sentence. With deep intelligence and massive heart, Sarah Priscus captures both the allure of fame and its dangers. I loved her thorny heroine, Faun, and I loved this novel." — Joanna Rakoff, international bestselling author of My Salinger Year and A Fortunate Age

"What a thrill it is to read Sarah Priscus’ 70s rock, California-dreaming Groupies. This shimmering debut is packed with tenderness and awe against a backdrop of drugs, sex, rock stars, and high drama. Faun is a lovable, believable, and wonderfully drawn character who will remain in my heart and mind for a very, very long time." — Jessica Anya Blau, author of Mary Jane

“A luscious glimpse into the ‘70s LA music scene—in all its exhilarating, destructive glory. A love letter to a lost time and a lost innocence, Sarah Priscus’ dark, glittering debut is irresistible.”  — Robin Wasserman, author of Mother Daughter Widow Wife and Girls on Fire

"The rockstar ‘70s as seen through the eyes of the wild and reckless girls eager to live in the shadow of fame—and the trouble that comes when they try to claim a place in the spotlight for themselves. Gripping, vivid, and perceptive, Groupies swept me into a darkly glittering world I didn’t want to leave." — Natalie Standiford, author of Astrid Sees All

“I devoured Groupies—a gritty, glamorous novel that shines a spotlight on the iconic women behind the male rock legend and asks the question, ‘what happens to girls who love too much?’” — Emma Brodie, author of Songs in Ursa Major

“Sarah Priscus writes like a dream and her candid, fantastic debut had me hooked. An incredibly vivid, evocative portrayal of a young woman drawn into a situation bigger than herself, this book enthralled me from the first sentence to the last. World, watch out for Sarah Priscus! She's gonna be a star.” — Elissa R. Sloan, author of The Unraveling of Cassidy Holmes

"Daisy Jones and The Six fans will fall in love with Sarah Priscus's debut Groupies." — Popsugar

"The story is peppered with so many details about debauched parties and blaring music that readers can almost see the Polaroids that Faun compulsively snaps. And although it’s quite effective as a time capsule of the 1970s rock scene, it’s also an exploration of obsession and a compassionate look at the women and girls many people would easily dismiss. This would be a perfect choice for fans of Daisy Jones & the Six. A gritty, glamorous novel full of sex, drugs, and rock ’n’ roll." — Kirkus Reviews

"Cinematic and glamorous, Priscus’s debut follows Faun's descent into what seemed a fairy tale, but turns out to be its opposite. And the groupies! No, they weren't just sex-crazed bimbos. They got a bad rap!" — Oprah Daily

"[A] biting and mesmerizing look into fame, media, and friendship." — Buzzfeed

“Through a succession of vivid scenery and authentically groovy characters, Priscus plants her finger on the fluttering pulse of the 1970s rock scene. This spirited dive into the past will delight rock fans young and old.” — Publishers Weekly

"Okay, this is 'historical' if you count the '70s as historical, and yes, we do. If you liked Taylor Jenkins Reid's Daisy Jones & The Six, this book is for you." — Cosmopolitan

"An epic tale of love, friendship, betrayal, and the long slide from sixties ideals into seventies addictions." — CrimeReads

"A great debut novel from author Sarah Priscus, who looks at this lifestyle of the time period in very vivid detail. You’re hooked right from the beginning and don’t want to put it down. If you’re a fan of sex, drugs and rock music, this is perfect for you." — Red Carpet Crash

"This 1970s rock novel is one hell of a ride. It’s fun on every page even when it’s exploring the pitfalls of coming-of-age, stardom, and obsession. Priscus absolutely slays this novel which is sure to be a runaway hit." — Debutiful

"Find drama, sex, drugs, and rock and roll in this glittery coming-of-age debut, perfect for fans of Daisy Jones & The Six and The Final Revival of Opal & Nev.” — Apartment Therapy