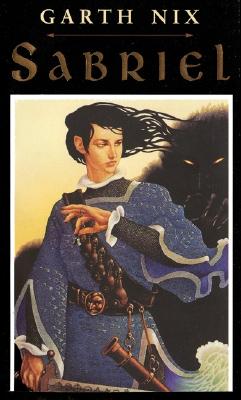 This is book number 1 in the Old Kingdom series.

"My favorite fantasy series of all time (leaving
out Tolkien, my true and first love). Mystical, haunting, dark, and magical,
the world Nix creates holds a wonderful sense of place, and his characters are
so vulnerable and strong and real that I'm always disappointed to turn
the last page and end my journey with them."

Sent to a boarding school in Ancelstierre as a young child, Sabriel has had little experience with the random power of Free Magic or the Dead who refuse to stay dead in the Old Kingdom. But during her final semester, her father, the Abhorsen, goes missing, and Sabriel knows she must enter the Old Kingdom to find him. She soon finds companions in Mogget, a cat whose aloof manner barely conceals its malevolent spirit, and Touchstone, a young Charter Mage long imprisoned by magic, now free in body but still trapped by painful memories.

As the three travel deep into the Old Kingdom, threats mount on all sides. And every step brings them closer to a battle that will pit them against the true forces of life and death—and bring Sabriel face-to-face with her own destiny.

“Sabriel is a winner, a fantasy that reads like realism. Here is a world with the same solidity and four-dimensional authority as our own, created with invention, clarity and intelligence.” —Philip Pullman, author of His Dark Materials trilogy

Two-time Caldecott-winning illustrators Leo and Diane Dillon have illustrated over 25 books for children, and have received many honors, including two Coretta Scott King Awards and the Society of Illustrators Gold Medal. They live in Brooklyn, NY.