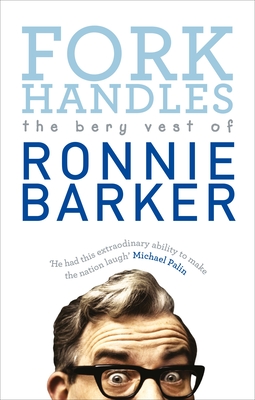 Loved by millions and collected here for the first time are the very best of Ronnie Barker’s classic sketches, monologues, songs, and, of course, the fantastic two-handers that he wrote for The Two Ronnies. Celebrating his genius for comic wordplay, this wonderful collection includes "Pismonouncers Unanimous," "An Appeal for Women," and "Swedish for Beginners," and the nation’s favorite sketch, "Fork Handles." As talented a writer as he was performer, Ronnie Barker was behind the best known Two Ronnies’ material. His comedy writing was so prolific that he began using the pseudonym Gerald Wiley while working on Frost on Sunday, which he continued when making The Two Ronnies, so eager was he to ensure that his writing was judged on its merit alone. Showcasing the work of a true comic icon, and one of the best writers and comedians of the twentieth century, Fork Handles is every bit as warm and funny as Ronnie Barker himself. With a foreword by Ronnie Corbett.

One of the greatest entertainers of his generation, RONNIE BARKER was loved by millions for his roles in classic shows Open All Hours, Porridge, and The Frost Report. Born in Bedford in 1929, Ronnie Barker began writing and performing in radio shows such as The Navy Lark. Barker met his comedy partner Ronnie Corbett while working on The Frost Report. Legend has it that they were signed up by the BBC after they impressed producers by filling in when a technical hitch occurred during the BAFTA awards. A gifted character actor as well as comedy writer, Barker went to star in classic sitcoms Open All Hours and Porridge.