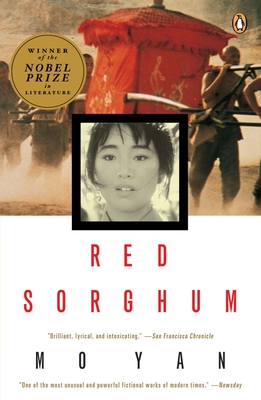 By Mo Yan, Howard Goldblatt (Translated by)
$18.00
Backordered. Place an order and we will let you know when to expect your book.

The acclaimed novel of love and resistance during late 1930s China by Mo Yan, winner of the 2012 Nobel Prize in Literature

Spanning three generations, this novel of family and myth is told through a series of flashbacks that depict events of staggering horror set against a landscape of gemlike beauty, as the Chinese battle both Japanese invaders and each other in the turbulent 1930s.

A legend in China, where it won major literary awards and inspired an Oscar-nominated film directed by Zhang Yimou, Red Sorghum is a book in which fable and history collide to produce fiction that is entirely new—and unforgettable.

Mo Yan is the pen name of the Chinese novelist Guan Moye, who is one of the most celebrated writers in the Chinese language. His best-known novels in the West include Red Sorghum, which was made into an award-winning film; The Garlic Ballads, Shifu: You’ll Do Anything for a Laugh; and Big Breasts and Wide Hips. He was awarded the 2012 Nobel Prize in Literature, making him the first resident of mainland China to win the award.


Praise for the work of Mo Yan:

“Through a mixture of fantasy and reality, historical and social perspectives, Mo Yan has created a world reminiscent in its complexity of those in the writings of William Faulkner and Gabriel García Márquez, at the same time finding a departure point in old Chinese literature and in oral tradition.” —The Nobel Prize Committee

“Mo Yan’s voice will find it’s way into the heart of the American reader, just as Kundera and García Márquez have.” —Amy Tan