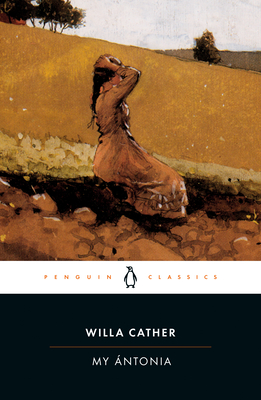 Willa Cather's My Ántonia is considered one of the most significant American novels of the twentieth century. Set during the great migration west to settle the plains of the North American continent, the narrative follows Antonia Shimerda, a pioneer who comes to Nebraska as a child and grows with the country, inspiring a childhood friend, Jim Burden, to write her life story. The novel is important both for its literary aesthetic and as a portrayal of important aspects of American social ideals and history, particularly the centrality of migration to American culture.

Willa Cather (1873-1947) was born in Virginia and raised on a Nebraska ranch. She is known for her beautifully evocative short stories and novels about the American West. Cather became the managing editor for McClure’s Magazine in 1906 and lived for forty years in New York City with her companion Edith Lewis. In 1922 Cather won the Pulitzer Prize for One of Ours, the story of a Western boy in World War I. In 1933 she was awarded the Prix Femina Americaine “for distinguished literary accomplishments.”

Joseph Murphy (1898-1981) was a prolific and widely admired New Thought minister and writer, best known for his motivational classic, The Power of Your Subconscious Mind, an international bestseller since it first blazed onto the self-help scene. His pamphlet How to Attract Money first appeared in 1955, and likewise entered many editions. Murphy wrote widely on the auto-suggestive and metaphysical faculties of the human mind and is considered one of the pioneering voices of affirmative-thinking philosophy.

“A book for our times . . . My Ántonia becomes an education in what it means to be American: to have come from elsewhere, with very little; to be mindful, amid every trapping of prosperity, of how little we once had, and were; to protect and nurture those newly arrived, wherever from, as if they were our own immigrant ancestors—equally scared, equally humble, and equally determined. . . . To read My Ántonia more than a century after its publication is a reminder of the timelessness of America’s bigotries. . . . But, more powerfully, Cather’s novel is a story of a country that can overcome prejudice.” —Bret Stephens, The New York Times

“No romantic novel ever written in America, by man or woman, is one half so beautiful as My Ántonia.” —H. L. Mencken

“The time will come when Willa Cather will be ranked above Hemingway.” —Leon Edel