Golf in the Kingdom (Compass) (Paperback) 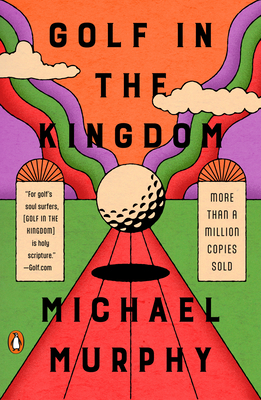 "...for golf’s soul surfers, Golf in the Kingdom is holy scripture." -- Golf

A spiritual journey, a lush travelogue, a parable of sports and philosophy—John Updike called this unique novel “a golf classic if any exists in our day.”

Now for the 50th anniversary, a beautiful new design and an introduction from Michael Murphy himself

Paired with a mysterious teacher named Shivas Irons, Michael Murphy is led through a round of phenomenal golf, swept into a world where extraordinary powers are unleashed in a backswing governed by “true gravity.” A night of adventure and revelation follows, and leads to a glimpse of Seamus MacDuff, the holy man who haunts a ravine off Burningbush’s thirteenth fairway—the one they call Lucifer’s Rug.

“A masterpiece on the mysticism of golf.” —San Francisco Chronicle

“A fascination . . . Golf in the Kingdom should have a long and prosperous life.” —Joseph Campbell

Michael Murphy began his quest into the nature of human potential in the late 1950s while a psychology major at Stanford University. After a year of graduate school, he spent 18 months in India, at the ashram of Sri Aurobindo in Pondicherry. Aurobindo started him thinking about the relationship between the evolution of consciousness and the physical body.

In 1961, shortly after his return to the United States, Murphy met Richard Price, another Standford Psychology major, and in 1962 they founded the Esalen Institute in Big Sur, California. The Esalen Institute, the leading growth center in the world, has hosted thousands of human potential workshops and conferences led by such notables as Abraham Maslow, Joseph Campbell, Rollo May, Fritz Perls, Aldous Huxley, Carl Rogers, Ida Rolf, Joan Halifax, Stanislov Grof, Joan Borysenko, Allen Ginsberg, and Linus Pauling, to name a few.

In 1980, he helped create the Esalen Institute’s Soviet American Exchange program which, among other things, initiated the first live television space bridges and hosted Boris Yeltsin during his first visit to the United States.

"Almost 50 years ago, Michael Murphy penned what many consider to be the definitive book on golf — not that he knew it at the time. But to this day, the magical power and mystical musings of golf in the kingdom inspire" -- Golf

“In the late ’70s, I discovered my caddie Mike [Fluff] Cowan had one book in his possession — a copy of Golf in the Kingdom, which was all torn apart and held together by tape and rubber bands. I said, ‘What is this?’ He growled, ‘Only the best golf book ever written.’ And he was right.” -- Peter Jacobsen

“It gives us the language to talk about the spiritual side of the game, which I have always believed in.” -- Brad Faxon

“a golf classic if any exists in our day.” -- John Updike


"...this book is a slow burn that relies on dialogue to make the reader think and examine why they play golf. As such, the book is best enjoyed by golfers who enjoy the mental aspects of the game and especially those that live for the feeling of peace the sport brings." -- Golflink.com