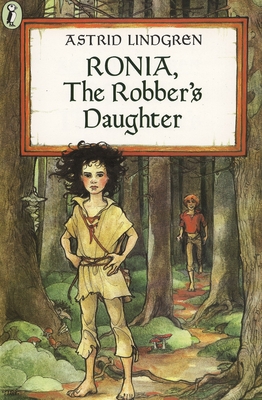 Read the book that inspired Studio Ghibli's series, Ronja the Robber’s Daughter! A thrilling adventure crafted by the author of Pippi Longstocking

On the night Ronia was born, a thunderstorm raged over the mountain, but in Matt's castle and among his band of robbers there was only joy - for Matt now had a spirited little black-haired daughter. Soon Ronia learns to dance and yell with the robbers, but it is alone in the forest that she feels truly at home. Then one day Ronia meets Birk, the son of Matt's arch-enemy. Soon after Ronia and Birk become friends the worst quarrel ever between the rival bands erupts, and Ronia and Berk are right in the middle.

Astrid Lindgren (1907-2002) was born in Sweden. After college, she worked in a newspaper office and a Swedish publishing house. Her most famous and beloved book, Pippi Longstocking, was originally published in Swedish in 1950, and was later translated into many other languages. It was followed by two sequels, Pippi Goes on Board and Pippi in the South Sea. Ms. Lindgren had a long, prolific career, writing more than 100 picture books, poems, short stories, plays, screenplays, and novels. In 1958, she won the Hans Christian Andersen Medal, the highest international award in children's literature.