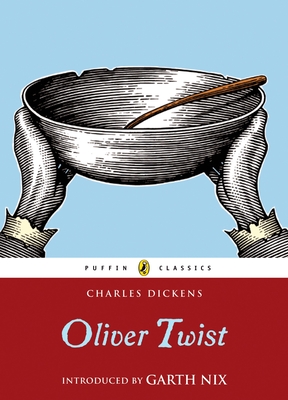 The classic story of a young boy who seeks his fortune on the streets of London. After Oliver Twist asks nasty Mr Bumble for more food, he has to flee the workhouse for the streets of London. Here he meets the Artful Dodger, who leads him to Fagin and his gang of pickpockets. When a thieving mission goes wrong, Oliver narrowly avoids prison and finds himself in the care of kind Mr Brownlow. But Fagin and the brutal Bill Sikes go in search of the young orphan, determined to drag him back . . . With an inspirational and light-hearted introduction by Garth Nix, Oliver Twist by Charles Dickens is one of the twelve wonderful classic stories being relaunched in Puffin Classics in March 2008.

Charles Dickens (1812–70) is one of the most recognized celebrities of English literature. His imagination, wit, mastery of the language and huge creative output single him out as one of the few people who genuinely deserve to be called genius. He had a poverty-stricken childhood and was determined to improve himself. By his early twenties he found a job as a parliamentary reporter and in his spare time wrote sketches of London life for newspapers and magazines. The publication of Pickwick Papers (1836) brought him the fame and fortune he craved. He wrote many other famous books including Oliver Twist, Great Expectations and A Christmas Carol.

"The power of [Dickens] is so amazing, that the reader at once becomes his captive, and must follow him whithersoever he leads."
--William Makepeace Thackeray