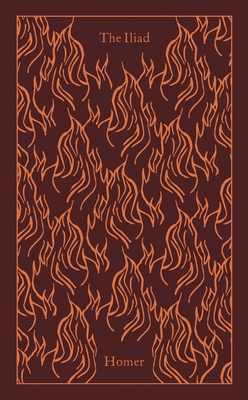 Part of Penguin’s beautiful hardcover Clothbound Classics series, designed by the award-winning Coralie Bickford-Smith, these delectable and collectible editions are bound in high-quality, tactile cloth with foil stamped into the design.

The Iliad is the first and the greatest literary achievement of Greek civilization—the cornerstone of Western culture and an epic poem without rival in world literature. The story centers on the critical events in the last year of the Trojan War, which lead to Achilleus’s killing of Hektor and the fall of Troy. But Homer's theme is not simply war or heroism. With compassion and humanity, he presents a universal and tragic view of the world: human life lived under the shadow of suffering and death set against a vast and largely unpitying divine background.

Seven Greek cities claim the honor of being the birthplace of Homer (c. 8th–7th century BC), the poet to whom the composition of the Iliad and the Odyssey are attributed. The Iliad is the oldest surviving work of Western literature, but the identity—or even the existence—of Homer himself is a complete mystery, with no reliable biographical information having survived.

E. V. Rieu initiated Penguin Classics with Allen Lane, and his famous translation of the Odyssey was the first book published in the series in 1947. The Iliad followed in 1950.

Coralie Bickford-Smith is an award-winning designer at Penguin Books, where she has created several highly acclaimed series designs. She studied typography at Reading University and lives in London.

“Fitzgerald has solved virtually every problem that has plagued translators of Homer. The narrative runs, the dialogue speaks, the military action is clear, and the repetitive epithets become useful text rather than exotic relics.” –Atlantic Monthly

“Fitzgerald’s swift rhythms, bright images, and superb English make Homer live as never before…This is for every reader in our time and possibly for all time.”–Library Journal

“[Fitzgerald’s Odyssey and Iliad] open up once more the unique greatness of Homer’s art at the level above the formula; yet at the same time they do not neglect the brilliant texture of Homeric verse at the level of the line and the phrase.” –The Yale Review

“What an age can read in Homer, what its translators can manage to say in his presence, is one gauge of its morale, one index to its system of exultations and reticences. The supple, the iridescent, the ironic, these modes are among our strengths, and among Mr. Fitzgerald’s.” –National Review

With an Introduction by Gregory Nagy