Alice's Adventures in Wonderland and Through the Looking-Glass (Paperback) 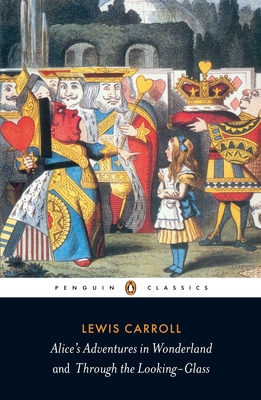 Original, experimental, and unparalleled in their charm, Lewis Carroll’s Alice’s Adventures in Wonderland and Through the Looking-Glass and What Alice Found There have enchanted readers for generations. The topsy-turvy dream worlds of Wonderland and the Looking-Glass realm are full of the unexpected: A baby turns into a pig, time stands still at a “mad” tea-party, and a chaotic game of chess turns seven-year-old Alice into a queen. These unforgettable tales—filled with sparkling wordplay and unbridled imagination—balance joyous nonsense with poignant moments of longing for the lost innocence of childhood.

Charles Lutwidge Dodgson, known by his pen name, Lewis Carroll, was a man of diverse interests - in mathematics, logic, photgraphy, art, theater, religion, medicine, and science. He was happiest in the company of children for whom he created puzzles, clever games, and charming letters.

As all Carroll admirers know, his book Alice's Adventures in Wonderland (1865), became an immediate success and has since been translated into more than eighty languages. The equally popular sequel Through the Looking-Glass and What Alice Found There, was published in 1872.

The Alice books are but one example of his wide ranging authorship. The Hunting of the Snark, a classic nonsense epic (1876) and Euclid and His Modern Rivals, a rare example of humorous work concerning mathematics, still entice and intrigue today's students. Sylvie and Bruno, published toward the end of his life contains startling ideas including an 1889 description of weightlessness.

The humor, sparkling wit and genius of this Victorian Englishman have lasted for more than a century. His books are among the most quoted works in the English language, and his influence (with that of his illustrator, Sir John Tenniel) can be seen everywhere, from the world of advertising to that of atomic physics.

Hugh Haughton is a senior lecturer at the University of York. He edited Lewis Carroll's Alice's Adventures in Wonderland and Through the Looking-Glass for Penguin Classics.

“Wonderland and the world through the Looking Glass were, I always knew, different from other imagined worlds. Nothing could be changed, although things in the story were always changing…Carroll moves his readers as he moves chess pieces and playing cards.”
–A. S. Byatt

“It would not have occurred to me even to suspect that the “children’s tale” was in brilliant ways coded to be read by adults and was in fact an English classic, a universally acclaimed intellectual tour de force and what might be described as a psychological/anthropological dissection of Victorian England. It seems not to have occurred to me that the child-Alice of drawing rooms, servants, tea and crumpets and chess, was of a distinctly different background than my own. I must have been the ideal reader: credulous, unjudging, eager, thrilled. I knew only that I believed in Alice, absolutely.”
–Joyce Carol Oates

“The Alices are the greatest nonsense ever written, and far greater, in my view, than most sense.”
–Philip Pullman