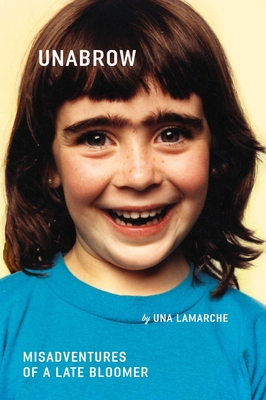 In between highbrow and lowbrow, there’s Unabrow.

"Take the cast of ‘Bridesmaids,’ add a dash of pre-pubescent Eugene Levy, and you have the humor stylings of Una LaMarche."—Ann Imig, founder of Listen to Your Mother

As a girl, Una LaMarche was as smart as she was awkward. She was blessed with a precocious intellect, a love of all things pop culture, and eyebrows bushier than Frida Kahlo’s. Adversity made her stronger...and funnier. In Unabrow, Una shares the cringe-inducing lessons she’s learned from a life as a late bloomer, including the seven deadly sins of DIY bangs, how not to make your own jorts, and how to handle pregnancy, plucking, and the rites of passage during which your own body is your worst frenemy.

For readers who loved Let’s Pretend This Never Happened and for fans of Mindy Kaling, Tina Fey, and Amy Schumer, Unabrow is the book June Cleaver would have written if she spent more time drinking and less time vacuuming.

UNA LAMARCHE is an award-winning journalist and blogger. She lives in Brooklyn with her husband and son.

"Hilarious, poignant, deceptively 'light'... well worth reading for the reflection and laughter it provokes in equal and utterly enjoyable measures."—Chicago Tribune

"A combo of quirky humor and rich fantasy life throughout this collection of 20 essays, which are interspersed with hilarious graphs, cartoons, and line drawings... LaMarche is entertaining and fresh; readers will want to savor this sassy, offbeat commentary."—Publishers Weekly

“Hilarious and spot-on."—F*cked in Park Slope

"A hilarious memoir. With an impeccable sense of humor, LaMarche guides us through her misadventures and serves up invaluable insights."—Sarah Barron, author of People Are Unappealing

"Take the cast of ‘Bridesmaids,’ add a dash of pre-pubescent Eugene Levy, and you have the humor stylings of the inimitable Una LaMarche. I adore this book."—Ann Imig, founder of Listen to Your Mother

"Una La Marche owns up to everything you probably still wouldn't admit—and she does it with laugh-out-loud style."—Amy Wilson, author of When Did I Get Like This?