Worst. Person. Ever.: A Novel (Paperback) 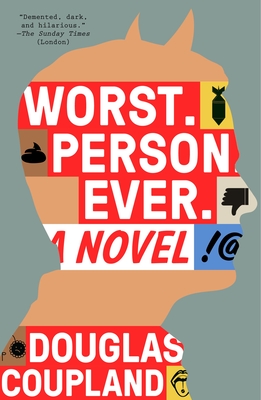 Raymond Gunt likes to think of himself as a pretty decent guy—he believes in helping his fellow man and all that other good stuff. Sure, he can be foulmouthed, occasionally misogynistic, and just generally rub people the wrong way—through no fault of his own! So with all the positive energy he’s creating, it’s a little perplexing to consider the recent downward spiral his life has taken….

An unemployed B-unit cameraman, Gunt accepts his ex-wife’s offer to shoot a Survivor-style reality show on an obscure island in the Pacific. Somehow, Gunt suffers multiple comas and unjust imprisonment, and is forced to reenact the “Angry Dance” from the movie Billy Elliott, among other tribulations and humiliations. Could the universe be trying to tell him something?

Douglas Coupland was born on a NATO base in Germany in 1961. He lives in Vancouver.

"It is hard to describe, out of context, quite how funny Coupland’s novel can be. A lot of its humour springs from the relentless hideousness of Gunt. And yet, increasingly, it is the very fact that Gunt— in Voltairean fashion—is the only character in Coupland’s menagerie who can see the awfulness of the human apocalypse around him that makes the book so compelling. Coupland’s eye for the strange, mesmerising wonder of modernity is being put, more than ever, to extremely dark use here. The fact that it is all so demented—and so frequently, belly-achingly hilarious—only makes that darkness all the more impressive.”—The Sunday Times

“[Raymond Gunt] is a fabulous monster, with nothing and no one safe from his vitriol. Raymond torments the obese, faces multiple incarcerations, makes leering advances at every woman crossing his path, and plays a role in a potentially globe-threatening nuclear event… Coupland skewers a pop world’s growing insensibilities, and his protagonist is a charming villain whom readers will likely root for, even as he’s insulting them.”—Publisher’s Weekly (starred)

“Engaging, funny and a rocking good read…Readers will identify with Ray Gunt in spite of themselves, taking pleasure in his crazy antics.”—BookPage