The Girls Who Went Away: The Hidden History of Women Who Surrendered Children for Adoption in the Decades Before Roe v. Wade (Paperback) 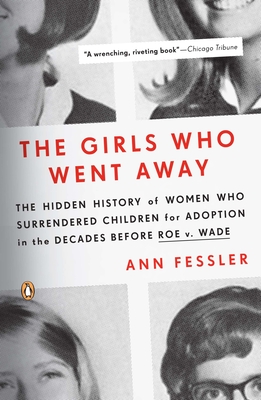 The astonishing untold history of the million and a half women who surrendered children for adoption due to enormous family and social pressure in the decades before Roe v. Wade.

“It would take a heart of stone not to be moved by the oral histories of these women and by the courage and candor with which they express themselves.” —The Washington Post

In this deeply moving and myth-shattering work, Ann Fessler brings out into the open for the first time the hidden social history of adoption before Roe v. Wade - and its lasting legacy. An adoptee who was herself surrendered during those years and recently made contact with her mother, Ann Fessler brilliantly brings to life the voices of more than a hundred women, as well as the spirit of those times, allowing the women to tell their stories in gripping and intimate detail.

Ann Fessler is a Professor Emerita at Rhode Island School of Design, where she taught from 1993 to 2018. She has spent nearly four decades creating work that deals with the stories of women and the impact that myths, stereotypes, and mass media images have on their lives and intimate relationships. She has spent the last twenty-five years bringing the first-person narratives and hidden history of adoption into the public sphere through her writing and visual works. She turned to the subject after being approached by a woman who thought Fessler might be the daughter she had surrendered forty years earlier. Though the woman was not her mother, Fessler, an adoptee, was profoundly moved by the experience. The conversation that ensued shifted the focus of her work to adoption and she has since produced three films, several audio and video installations, and written The Girls Who Went Away.

“It would take a heart of stone not to be moved by the oral histories of these women and by the courage and candor with which they express themselves.” —The Washington Post