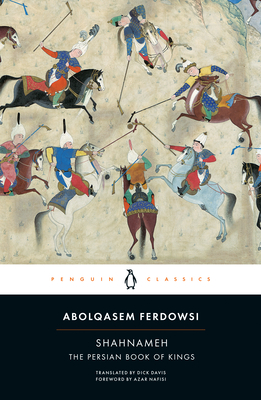 Dick Davis—“our pre-eminent translator from the Persian” (The Washington Post)—has revised and expanded his acclaimed translation of Ferdowsi’s masterpiece, adding more than 100 pages of newly translated text. Davis’s elegant combination of prose and verse allows the poetry of the Shahnameh to sing its own tales directly, interspersed sparingly with clearly marked explanations to ease along modern readers.

Originally composed for the Samanid princes of Khorasan in the tenth century, the Shahnameh is among the greatest works of world literature. This prodigious narrative tells the story of pre-Islamic Persia, from the mythical creation of the world and the dawn of Persian civilization through the seventh-century Arab conquest. The stories of the Shahnameh are deeply embedded in Persian culture and beyond, as attested by their appearance in such works as The Kite Runner and the love poems of Rumi and Hafez.

Abolqasem Ferdowsi was born in Khorasan in a village near Tus in 940. His great epic, Shahnameh, was originally composed for the Samanid princes of Khorasan. Ferdowsi died around 1020 in poverty.

Dick Davis (translator) is professor emeritus of Persian at Ohio State University and a fellow of the Royal Society of Literature. His translations from Persian include Faces of Love: Hafez and the Poets of Shiraz and Vis and Ramin.

Azar Nafisi (foreword) is the #1 New York Times–bestselling author of Reading Lolita in Tehran, Things I’ve Been Silent About, and The Republic of Imagination. She lives in Washington, D.C.