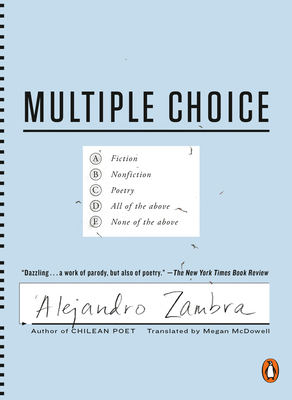 By Alejandro Zambra, Megan McDowell (Translated by)
$16.00
Backordered. Place an order and we will let you know when to expect your book.

NAMED ONE OF THE BEST BOOKS OF THE YEAR BY NPR, THE GUARDIAN, AND THE IRISH TIMES

“Latin America’s new literary star” (The New Yorker), Alejandro Zambra is celebrated around the world for his strikingly original, slyly funny, daringly unconventional fiction. Now, at the height of his powers, Zambra returns with his most audaciously brilliant book yet.

Written in the form of a standardized test, Multiple Choice invites the reader to respond to virtuoso language exercises and short narrative passages through multiple-choice questions that are thought-provoking, usually unanswerable, and often absurd. It offers a new kind of reading experience, one in which the reader participates directly in the creation of meaning, and the nature of storytelling itself is called into question. At once funny, poignant, and political, Multiple Choice is about love and family, authoritarianism and its legacies, and the conviction that, rather than learning to think for ourselves, we are trained to obey and repeat. Serious in its literary ambition and playful in its execution, it confirms Alejandro Zambra as one of the most important writers working in any language.

NAMED A BEST BOOK OF THE SUMMER BY THE WALL STREET JOURNAL, ELLE, THE HUFFINGTON POST, THE MILLIONS, VOX, LIT HUB, THE BBC, THE GUARDIAN AND PUREWOW

Alejandro Zambra is the author of the story collection My Documents, which was a finalist for the Frank O'Connor International Short Story Award, and three previous novels: Ways of Going Home, The Private Lives of Trees, and Bonsai. His books have been translated into more than ten languages. He has received numerous prizes in Chile, including the Chilean Literary Critics' Award in 2007 and the National Book Council's award for best novel in 2007 and 2012, as well as international distinctions such as the Prince Claus Award in Holland. His stories have appeared in The New Yorker, The Paris Review, Harper’s, Tin House, and McSweeney’s, among others. In 2010, he was named one of Granta’s Best Young Spanish-Language Novelists. A 2015–2016 Cullman Center fellow at the New York Public Library, he divides his time between New York and Santiago, Chile.

Megan McDowell is a Spanish language literary translator from Richmond, Kentucky. With the exception of Bonsai, she has translated all of Zambra’s books. She lives in Santiago, Chile.

"This is a book about love, loss, guilt, empathy, inequality and life under Chile's dictatorship. It's a slim volume, but calls for lingering. It's beautiful, fascinating, brilliant, brutal, all of the above." —NPR's "Guide To 2016’s Great Reads"

"Brilliant, innovative, beautiful." —The Guardian, "The Best Books for Summer 2016"

"Throughout Multiple Choice, Zambra traffics in a depth of imagination and playfulness that is akin to a guessing game. As with many of his earlier works, he is content to play with, prod, and shake up the reader, confirming once again that the questions we ask about the world and about ourselves are oftentimes far more telling than the answers.” —NPR

"Multiple Choice made me laugh repeatedly, often ruefully. . . . Zambra is superbly equipped to major in writing fiction about the unhappiness of human beings, with secondary concentrations in lampooning hypocrisy and satirizing repression. I recommend you admit him to your reading list immediately." —Jim Higgins, The Milwaukee Journal Sentinel

"Zambra uses this restrictive form for playfully serious ends, questioning the very things — coherence and comprehension — that such tests seek to measure and encourage." —The Boston Globe

"Brilliant . . . Like a literary exercise for the mind, but strangely fun to decode." —Elle, "19 Summer Books That Everyone Will Be Talking About"

"[Zambra] is at his most spare here, but also his most innovative. By taking the tests he’s set for us, by participating in the stories by reconstructing and editing them, we’re invited to reflect on the most basic needs fiction tries to meet, or according to which it is judged." —Financial Times

"As exciting as it is mind-bending . . . Zambra’s novel is wildly inventive and utterly confusing in the best way possible." —PureWow, "The Ultimate 2016 Summer Book Guide"

“[Zambra's] stories are so playful and open, so simple and so much fun to read, so equally joyful and sad, that they can be about anything, or everything, or nothing. They really do invite the reader’s participation in the construction of the text. Which makes Zambra’s work, Multiple Choice included, captivating and meaningful in the best possible ways.” –The Rumpus

“A small book packed with meaning and space for interpretation. By structuring it as a test, the author comments on the rigidity of Chile’s former fascist leader. By allowing the reader to meditate on how to make sense of each puzzling question, he offers an alternative to enforced structure.” –The Huffington Post, Book of the Week

“A great book…[that] infuses the format of a standardized test with: (a) playfulness, (b) sadness, (c) frustration, (d) political commentary and (e) a great story.” –Shelf Awareness

"[Zambra turns] the reader into writer and editor and critic and then back again in a series of multiple-choice questions...all exhibiting [his] knack for cleverly self-aware metafiction." —The Village Voice

"An exercise in flouting literary conventions . . . This sly slender book is divided into 90 multiple-choice questions suggesting that how we respond to a story depends on where the writer places narrative stress." —The Millions, "Most Anticipated: The Great Second-Half 2016 Book Preview"

"The perfect next step for an author who has always specialized in short, lyric works and who has increasingly embraced a hybrid genre of fiction that sort of acts like a novel but kind of looks like a short story collection." —Literary Hub, "21 Books You Should Read This July"

“Amusing and unexpected . . .  In just a few pages [Zambra] manages to be repeatedly engaging, smart, funny, and sad." —Publishers Weekly

"Consistently witty and provocative . . . True or false: can effective fiction be written in the format of a standardized test? Answer: pretty much, and few are as equipped to do it as well as Chilean writer Zambra." —Kirkus Reviews

“Zambra is the defining light of today’s Latin American literature—an author whose cult is about to take over, the one we'll all be congratulating ourselves on having known about in the early days, before his deceptively slender masterpieces lay on every American reader's night table. Multiple Choice is the most daring distillation yet of his inimitable, take-no-prisoners genius.” —John Wray, author of The Lost Time Accidents

“When I read Zambra I feel like someone’s shooting fireworks inside my head. His prose is as compact as a grain of gunpowder, but its allusions and ramifications branch out and illuminate even the most remote corners of our minds.” —Valeria Luiselli, author of The Story of My Teeth

“Zambra builds an elegant structure out of the important elements of life—competition, pride, vigor, death, sex—against a landscape of political menace. Read his book and, as with all true art, you'll be left wondering what it means but feeling that you know.” —Atticus Lish, author of Preparation for the Next Life

“Multiple Choice is unlike anything I've ever encountered before. With his test questions and answers, the incomparable Alejandro Zambra creates verbal playgrounds for reverie, imagination, thought, and memory, and leads you through labyrinthine corridors in which you inevitably encounter yourself. Reading this book is a wonderfully disconcerting and unforgettable experience.”  —Francisco Goldman, author of Say Her Name

"There is no writer like Alejandro Zambra, no one as bold, as subtle, as funny. Multiple Choice is his most accomplished work yet, an apparently playful literary game you quickly realize is also deadly serious. This book is not to be missed." —Daniel Alarcón, author of At Night We Walk In Circles

“Falling in love with Zambra’s literature is a fascinating road to travel. Imaginative and original, he is a master of short forms; I adore his devastating audacity.” —Enrique Vila-Matas, author of The Illogic of Kassel

"I loved Multiple Choice. I hate exams, but I've sat this one a few times already. I'd give it an A-. The minus for being too smart and getting away with it." —Stuart Evers, author of Your Father Sends His Love

"As slim as Chile herself. As serrated and complex as her riddled coastline. There's so much to admire and enjoy in this dazzling little book." —Gavin Corbett, author of Green Glowing Skull