A Map of Home: A Novel (Paperback) 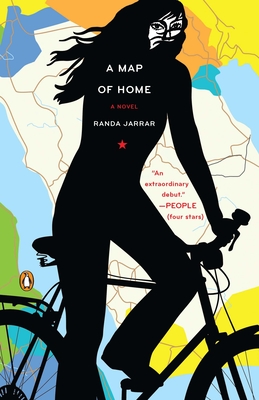 From America to the Middle East and back again— the sparkling story of one girl’s childhood, by an exciting new voice in literary fiction

In this fresh, funny, and fearless debut novel, Randa Jarrar chronicles the coming-of-age of Nidali, one of the most unique and irrepressible narrators in contemporary fiction. Born in 1970s Boston to an Egyptian-Greek mother and a Palestinian father, the rebellious Nidali—whose name is a feminization of the word “struggle”—soon moves to a very different life in Kuwait. There the family leads a mildly eccentric middle-class existence until the Iraqi invasion drives them first to Egypt and then to Texas. This critically acclaimed debut novel is set to capture the hearts of everyone who has ever wondered what their own map of home might look like.

Randa Jarrar was born in Chicago in 1978. She grew up in Kuwait and Egypt, and moved back to the U.S. at thirteen. She is a writer and translator whose honors include the Million Writers Award, the Avery Hopwood and Jule Hopwood Award and the Geoffrey James Gosling Prize. Her fiction has appeared in Ploughshares as well as in numerous journals and anthologies. Her translations from the Arabic have appeared in Words Without Borders: The World Through the Eyes of Writers; recently, she translated Hassan Daoud’s novel, The Year of the Revolutionary New Bread-Making Machine. She currently lives in Ann Arbor, Michigan. A Map of Home is her first novel.

"[An] extraordinary debut . . . Jarrar's lack of sentimentality, and her wry sense of humor, make A Map of Home a treasure." —People (four stars)

"A Map of Home will leave you laughing out loud." —Entertainment Weekly

"Randa Jarrar takes all the sappy, beloved clichTs about 'where you hang your hat' and blows them to smithereens in her energizing, caustically comic debut novel." —The Christian Science Monitor

“Jarrar is a funny, incisive writer, and she’s positively heroic in her refusal to employ easy sentimentality or cheap pathos. . . . A coming-of-age story that’s both singular and universal—an outstanding debut." —Kirkus Reviews

“In Randa Jarrar’s A Map of Home, Nidali, a refugee from Saddam’s bombs, finds a Texan adolescence dizzying to navigate with her Egyptian-Grecian-Palestinian background. Jarrar’s prose is as delightfully dry and intense as her main character. . . . Sarcastic essays, Arabic lyrics juxtaposed with American rap, and other anecdotes present cross-cultural observations that are both humorous and wistful.”—Oxford American

“Nidali’s voice is a winning combination of the detailed observations of a wannabe writer and the snark of an acerbic adolescent, and with her as a tour guide, readers won’t need a map through this spectacular fresh and funny debut novel.” —Bust Magazine

“Jarrar’s debut novel is a narrative of otherness. . . . Despite exposure to so much turmoil and divisiveness, the teenager finds she is not unlike other American girls—much to her father’s dismay.” —Ms. Magazine

“Ah, eccentric families. In Jarrar’s first novel, the lovable Ammars are talkative, argumentative, and so alive they practically burst off the page. . . . Jarrar is sophisticated and deft, and her impressive debut is especially intriguing considering her clever use of recent Middle East history.” —Booklist

Jarrar. . . . has created a tale of crossing borders (geographic, sexual, cultural, and otherwise) that challenges readers to remap the boundaries of “normal” adolescence.” —Bitch Magazine

“Jarrar’s sparkling debut about an audacious Muslim girl growing up in Kuwait, Egypt and Texas is intimate, perceptive and very, very funny. … her exhilarating voice and flawless timing make this a standout.” —Publishers Weekly (starred review)