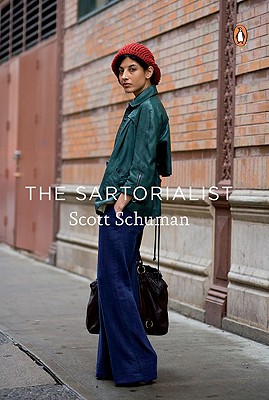 By Scott Schuman
$30.00
Not available to order.

A gorgeous collection of photographs from the creator of the original street style blog.

Scott Schuman just wanted to take photographs of people that he met on the streets of New York who he felt looked great.

His now-famous and much-loved blog, thesartorialist.com, is his showcase for the wonderful and varied sartorial tastes of real people across the globe. This book is a beautiful anthology of Scott?s favorite images, accompanied by his insightful commentary. It includes photographs of well-known fashion figures alongside people encountered on the street whose personal style and taste demand a closer look.

From the streets of New York to the parks of Florence, from Stockholm to Paris, from London to Moscow and Milan, these are the men and women who have inspired Scott and the many diverse and fashionable readers of his blog.

After fifteen years in the fashion business, Scott Schuman felt a growing disconnect between what he saw on the runways and in magazines, and what real people were wearing. The Sartorialist was his attempt to redress the balance. Since its beginning, the blog has become hugely admired and influential in the fashion industry and beyond. Thesartorialist.com is consistently named one of the top blogs in the world. A self-taught photographer, Schuman shoots for publications including French Vogue, American GQ, Fantastic Man and Elle, and a growing list of advertising clients. Scott has also shown his work at the New York photo gallery The Danziger Projects and appeared in the GAP Style Icon campaign in the fall of 2008. He has been named the number one fashion photography trend by American Photo magazine, as well as one of Time magazine?s top 100 design influencers.

Scott Schuman started thesartorialist.com simply to share photos of people on the street who he thought looked great. The blog now receives more than fourteen million page views per month. His work resides in the permanent collections of the Victoria and Albert Museum and the Tokyo Metropolitan Museum of Photography and has been featured in GQ, Vogue Italia, Vogue Paris, andInterview. He lives in New York.

Praise for The Sartorialist

“The quirky, the refined, the interesting, the elegant, and the sometimes outrageous come together in a visual history . . . chock-full of photographs you want to pore over with your friend. . . . Make some room on your bookshelf.” —The New York Times

“Schuman's pictures put fashion in the context of life.” —Salon.com

“Scott doesn’t just take pictures, he captures emotion. He is not just a photographer. He’s a historian marking the feeling of this generation one photo at a time.” —Kanye West


Praise for The Sartorialist: Closer

“The Sartorialist: Closer appeals on so many different levels. Whether the reader is into photography, fashion, style, or people watching, this is a book guaranteed to more than please.” —New York Journal of Books

“Scott’s quest on the sidewalks of the world is like a gold miner sifting gravel for the rare pebbles of gold. Global fashion takes on new meaning through his work: as his subjects confirm, compelling personal style knows no boundaries!” —Harold Koda, Curator in Charge, The Costume Institute at the Metropolitan Museum of Art