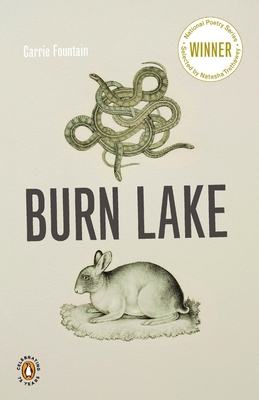 Selected for the 2009 National Poetry Series by Natasha Trethewey

Set in southern New Mexico, where her family's multi­cultural history is deeply rooted, the poems in Carrie Fountain's first collection explore issues of progress, history, violence, sexuality, and the self. Burn Lake weaves together the experience of life in the rapidly changing American Southwest with the peculiar journey of Don Juan de Oñate, who was dispatched from Mexico City in the late sixteenth- century by Spanish royalty to settle the so-called New Mexico Province, of which little was known. A letter that was sent to Oñate by the Viceroy of New Spain, asking that should he come upon the North Sea in New Mexico, he should give a detailed report of "the configuration of the coast and the capacity of each harbor" becomes the inspiration for many of the poems in this artfully composed debut.

Carrie Fountain was born and raised in Mesilla, New Mexico. Fountain’s books include the National Poetry Series award winner Burn Lake and Instant Winner. Her poems have appeared in American Poetry Review, Poetry, and Tin House, among others. She received her MFA at the James A. Michener Center for Writers at the University of Texas at Austin where she was a fellow. She lives with her husband, playwright and novelist Kirk Lynn, in Austin, Texas.