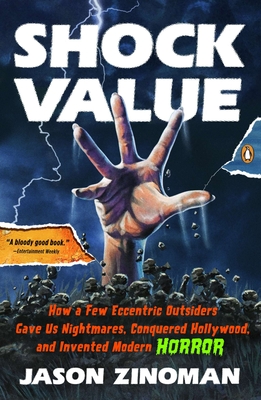 By Jason Zinoman
$17.00
Backordered. Place an order and we will let you know when to expect your book.

Much has been written about the storied New Hollywood of the 1970s, but at the same time that Steven Spielberg and Martin Scorcese were producing their first classic movies, a parallel universe of directors gave birth to the modern horror film. Shock Value tells the unlikely story of how directors like Wes Craven, Roman Polanski, and John Carpenter revolutionized the genre in the 1970s, plumbing their deepest anxieties to bring a gritty realism and political edge to their craft. From Rosemary’s Baby to Halloween, the films they unleashed on the world created a template for horror that has been relentlessly imitated but rarely matched. Based on unprecedented access to the genre’s major players, this is an enormously entertaining account of a hugely influential golden age in American film.

Jason Zinoman is a critic and reporter covering theater for The New York Times. He has also regularly written about movies, television, books and sports for publications such as Vanity Fair, The Guardian and Slate. He was the chief theater critic for Time Out New York before leaving to write the On Stage and Off column in the Weekend section of the Times. He grew up in Washington D.C. and now lives in Brooklyn.

“In Shock Value, New York Times scribe Zinoman attempts to give these directors the same treatment Peter Biskind gave Spielberg, Scorsese, and Coppola in his magnificent Easy Riders, Raging Bulls. In other words, he explains the filmmakers’ importance while never letting his cultural theorizing get in the way of a good production yarn or intriguing biographical nugget. Zinoman succeeds monstrously well in this mission…there is plenty here to make the most knowledgeable of horror fans’ head explode.” — Entertainment Weekly

“Not only is Shock Value enormously well-researched — the book is based on the author's interviews with almost all of the movement's principals — it's also an unbelievable amount of fun. Zinoman writes with a strong narrative drive and a contagious charisma.” — NPR.org

“[Shock Value] fuses biography (in this case, of such masters of horror as Wes Craven, John Carpenter and Tobe Hooper), production history, movie criticism and social commentary into a unified and irresistible story...You should finish a great movie book with your dander up and your Netflix queue swelled by at least a dozen titles. And on that count, Shock Value more than delivers.” — Laura Miller, Salon.com

"Zinoman...concentrates on a handful of films and filmmakers that brought the corpse back to life during the late 1960s and early ’70s, and he convincingly conveys what made movies like 'Night of the Living Dead' and 'The Texas Chainsaw Massacre' different from anything that had come before: more unsettling, purer in their sense of dread...where Shock Value excels is in its primary research, the stories of how the seminal shockers of this era came to be.” — The New York Times

“Impassioned, articulate prose…Zinoman is such a literate, intelligent defender of the cause that his arguments are well worth reading. Even better, he has a knack for finding the characters in behind-the-scenes theatrics.” — The Onion

“Though in-depth character bios and discussion of the changing movie business are fascinating, Zinoman’s shot-by-shot descriptions of groundbreaking films and championing of understated gems are even more impressive. This volume reveals just enough to satiate horror aficionados, while offering plenty for curious fright-seekers who want to explore the formative years of what’s become a billion-dollar industry.” — Publishers Weekly starred review

“Insightful, revealing, and thoroughly engrossing…Thoroughly researched, Shock Value is chock full of nuggets of insider details that even the most hardcore horror fan might not know.” — About.com

“Between 1968 and 1976, all the films that redefined the horror movie were made: Night of the Living Dead, Rosemary’s Baby, The Exorcist, Dark Star, The Last House on the Left, The Texas Chain Saw Massacre, and Carrie. In fluent reporter’s prose lent urgency by personal fascination, Zinoman tells how their creators made those paradigm-shifters…There are many good-bad and downright bad books about horror movies. Zinoman gives us the rare all-good book about them.” — Roy Olson, Booklist

“May well prove to be the most indispensable overview of modern horror.” — Rue Morgue Magazine