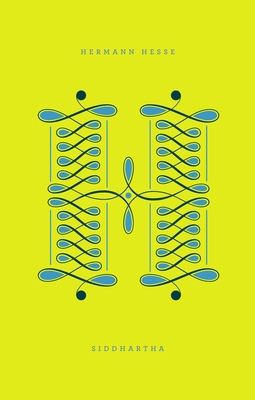 It all begins with a letter. Fall in love with Penguin Drop Caps, a new series of twenty-six collectible and hardcover editions, each with a type cover showcasing a gorgeously illustrated letter of the alphabet. In a design collaboration between Jessica Hische and Penguin Art Director Paul Buckley, the series features unique cover art by Hische, a superstar in the world of type design and illustration, whose work has appeared everywhere from Tiffany & Co. to Wes Anderson's recent film Moonrise Kingdom to Penguin's own bestsellers Committed and Rules of Civility. With exclusive designs that have never before appeared on Hische's hugely popular Daily Drop Cap blog, the Penguin Drop Caps series launches with six perennial favorites to give as elegant gifts, or to showcase on your own shelves.

H is for Hesse. A young Brahmin named Siddhartha searches for ultimate reality after meeting with the Buddha. His quest takes him from a life of decadence to asceticism, from the illusory joys of sensual love with a beautiful courtesan, and of wealth and fame, to the painful struggles with his son and the ultimate wisdom of renunciation. Integrating Eastern and Western spiritual traditions with psychoanalysis and philosophy, written with a deep and moving empathy for humanity, Herman Hesse’s strangely simple Siddhartha is perhaps the most important and compelling moral allegory the troubled twentieth century ever produced.

Hermann Hesse (1877-1962) spent World War I in Switzerland. After the war and a psychological crisis, he removed himself to the small town of Montagnola, where he created his best-known works. He received many important honors, including the Nobel Prize for Literature in 1946.

Joachim Neugroschel (1938–2011) translated numerous books from French, German, Italian, Russian, and Yiddish. The winner of three PEN translation awards and the French-American Foundation translation prize, he translated Thomas Mann’s Death in Venice, E. T. A. Hoffman and Alexadre Dumas’s Nutcracker and Mouse King, and Leopold von Sacher-Masoch’s Venus in Furs for Penguin Classics. He also compiled several anthologies including Great Tales of Jewish Fantasy and the Occult, A Dybbuk and Other Tales of the Supernatural, and The Golem: A New Translation of the Classic Play and Selected Short Stories.

Jessica Hische is a letterer, illustrator, typographer, and web designer. She currently serves on the Type Directors Club board of directors, has been named a Forbes Magazine "30 under 30" in art and design as well as an ADC Young Gun and one of Print Magazine’s "New Visual Artists". She has designed for Wes Anderson, McSweeney's, Tiffany & Co, Penguin Books and many others. She resides primarily in San Francisco, occasionally in Brooklyn.