Diaries of an Unfinished Revolution: Voices from Tunis to Damascus (Paperback) 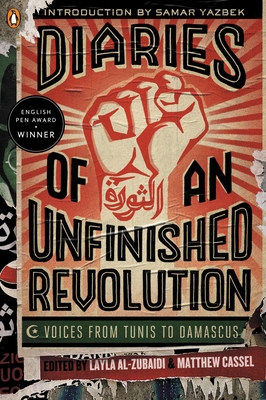 As revolution swept through the Arab world in spring of 2011, much of the writing that reached the West came via analysts and academics, experts and expats. We heard about Facebook posts and tweeted calls to action, but what was missing was testimony from on-the-ground participants—which is precisely what Layla Al-Zubaidi and Matthew Cassel have brought together in Diaries of an Unfinished Revolution. These essays and profoundly moving, often harrowing, firsthand accounts span the region from Tunisia to Syria and include contributors ranging from student activists to seasoned journalists—half of whom are women. This unique collection explores just how deeply politics can be held within the personal and highlights the power of writing in a time of revolution.

LAYLA AL-ZUBAIDI is Director of the Heinrich Böll Foundation in South Africa, and was previously based in Beirut and Ramallah. She has published on cultural resistance and freedom of expression, and is co-editor of Democratic Transition in the Middle East: Unmaking Power (Routledge, 2012). She is also on the Executive Committee of Freemuse—World Forum on Music and Censorship.

MATTHEW CASSEL is a journalist and photographer covering the Middle East for Al Jazeera English. Cassel first learned about the region through his human rights and media work in Palestinian refugee camps. Over the past decade he has worked in the occupied Palestinian territories, Lebanon, Egypt, Turkey, Syria, Jordan, Bahrain and elsewhere. Formerly Assistant Editor of the The Electronic Intifada online journal, he is connected to activists, journalists, writers, artists and others at the forefront of the movement for change in the region.

NEMONIE CRAVEN RODERICK is a literary agent. She has contributed to Sight & Sound, Roads & Kingdoms and The Blackwell Encyclopedia of Literary and Cultural Theory, amongst other publications.

ALI ALDAIRY is a Bahraini researcher, linguist and cultural critic, interested in philosophy and religion. He is the author of several books and maintains his own website (//aldairy.ws). As a long standing activist he has been struggling since the Bahraini uprising in 2011 and was forced to leave the country. In exile he founded the online Arabic newspaper Mira’at al-Bahrain (The Bahrain Mirror).

SAFA AL AHMAD is a Saudi freelance journalist based in the Middle East. She has worked both in print and for TV, for major channels in the region, and was a finalist for the 2012 Rory Peck awards for freelance journalism. With the start of the second intifada she traveled to Palestine, then on to Lebanon, Bahrain, the Democratic Republic of Congo and Libya, among others.

KHAWLA DUNIA is a lawyer, writer and researcher from Damascus, a member of the editorial board of The Damascus Center for Theoretical Studies and Civil Rights. She has published several studies, including Syrian Women between Reality and Ambition, Report on the Damascus Declaration Detainees and reports on elections and political issues. She is now active in the protests and writes about them on the Arabic website Safhat Suriya (Syria Pages).

JAMAL JUBRAN is a journalist, poet and author, based in Sanaa. He regularly contributes to Beirut-based Al-Akhbar English and his articles have been translated and published in a number of international publications. He also has taught at Sanaa University, but was expelled because of his political activities. Before and during the Yemeni uprising, he was active in the group around Nobel peace laureate Tawakkul Karman.

MOHAMED MESRATI was born in 1990 in Tripoli, Libya. He is a writer and activist, and an extract from his novel-in-progress Mama Pizza appeared in Banipal No. 40.

GHANIA MOUFFOK is a journalist based in Algiers. She is a correspondent for TV5 MONDE and hosts the blog Une femme à sa fenêtre (A Woman at her Window) on the channel’s website. She writes for various journals, including Le Monde Diplomatique, the Swiss La Liberté, and the Algerian online-journal Maghreb Emergent. She is also an engaged feminist and human rights activist and collaborates with the UN and civil society organizations. Among her publications are Une autre voie pour l’Algérie (with Louisa Hanoune, 1995), Etre journaliste en Algérie (1996) and Apprendre à vivre ensemble (2011).

YASMINE EL RASHIDI is a frequent contributor to the New York Review of Books, and a contributing editor to the Middle East arts and culture quarterly Bidoun. A collection of her writings on the Egyptian uprising, The Battle for Egypt, was published in 2011. She lives in Cairo.

MALEK SGHIRI is a 25-year old student of Contemporary History at the April 9 College of the Humanities and Social Sciences in Tunis. He is a political activist, blogger, trade unionist and leader of the General Union of Tunisian Students. He founded the movement Jil Jadid (New Generation), participated in student demonstrations in Tunis, in the revolt of Thala, and in the mass protests against the rule of Ben Ali that took in place in Tadamon. He was arrested and detained at the Ministry of Interior on January 11th and later released on January 18, 2011.

SAMAR YAZBEK is a Syrian writer and journalist. She was born in Jableh in 1970, and was forced into exile following her criticism of the Asad regime and involvement in the Syrian uprising. In 2012, she won the PEN/Pinter International Writer of Courage prize for her book A Woman in Crossfire and the PEN Tucholsky prize in Sweden, and is soon to be awarded the PEN OXFAM prize in the Netherlands. She is the author of numerous works of fiction and was selected as one of the Beirut39 in 2010.

ROBIN MOGER is an Arabic translator currently living in Cape Town, South Africa. From 2001 to 2007 he lived in Egypt, where he worked variously as a journalist, translator and interpreter. He has translated the novels A Dog With No Tail by Hamdi Abu Gollayel (2009) and Vertigo by Ahmed Mourad (2011), and is a regular contributor to Banipal.

Praise for Diaries of an Unfinished Revolution: Voices from Tunis to Damascus

"There is an undeniable power to the presence of time and movement in these accounts."
—New York Times Book Review

“With both poetic flourish and eyewitness intensity, the events of the Arab Spring are rendered newly relevant and visceral in this anthology of first-person accounts from Tunisia to Syria. In this haunting collection, editors Cassel, Al-Zubaidi, and Roderick present breathtakingly beautiful writing by young people who witnessed the remarkable events of 2011, and manage to accomplish what the media did not: provide context and meaning to a movement that confounded existing narratives of the Middle East.”
—Publishers Weekly Starred Review

“For readers interested in the personal, firsthand stories of the young men and women who stood and fought in those chaotic city squares throughout the Middle East, the English PEN Award–winning Diaries adds a vastly different, historically vital perspective on the Arab Spring’s revolutions-in-progress…these eye-opening, untold accounts from students and local journalists alike are as essential to the historical record as they are to the outsider looking to understand what the Arab Spring is really about.”
—Booklist Starred Review

"Captures [the Arab Spring's] courage on page after page...consistently vivid and far more personal than most journalism."
--The Dallas Morning News

"The writing is accessible -- in addition to being lyrical, melancholy, and spirited."
—Biographile


"[Diaries of an Unfinished Revolution] is not the revolution itself, but its continuation with literary means. As people in the Arab world recaptured the public sphere, this book opens a literary space, in which the actors and authors of the revolutions can meet and express free of fear. It is a book that nobody can avoid if he wants to understand what is happening in the Arab world."—Diesseits

“What this anthology makes abundantly clear is that the young people behind these uprisings, though often optimistic, were not blinded by the fervour of revolution but were in fact acutely aware of the obstacles that lay ahead.”
—London School of Economics Review of Books

"If ever there is a book that should be championed, it is [Diaries of an Unfinished Revolution]. . . . Among the most moving, inspiring, and revealing pieces of non-fiction we've come across in some time."
—The National (U.A.E.)
"[Diaries of an Unfinished Revolution] provides a terrifying insight into the world of authoritarian regimes where freedom and democracy are alien concepts. Each of the eight accounts in this impressive anthology is accessible and illuminating."
—The Independent (U.K.)

"These stories of the Arab Spring are the brave first draft of history, written by its participants even as they were blinded by tear gas, arrested, running from the gunshots. Their voices are honest and compelling, by turns angry, afraid, frustrated, confused, embattled and hopeful.  Amidst all the punditry and wittering commentators, here is the real feel of what it means to stand up for freedom and to risk everything in doing so."
—Wendell Steavenson, correspondent for the The New Yorker and author of The Weight of a Mustard Seed

"The ongoing Arab revolts debunked Orientalist myths about the region and disoriented the "experts". The voices of the generation spearheading these revolts are at times drowned out by the cacophony and confusion of old and new experts issuing pre-mature obituaries. This book gives space to those men and women writing of and for monumental change and demanding attention."
—Sinan Antoon, author of I'jaam - an Iraqi Rhapsody and co-director About Baghdad

From the editors' preface

"The dominant voices discussing the uprisings in most English-language media came from an elite group of professional 'experts,' often commenting far from the battles taking place in the streets. This book aims to correct that. The contributors to this anthology did not sit on the sidelines while things happened. Each of them played a role in shaping their country's future and documenting uncomfortable truths long before the wave of mass uprisings began, and they continue to do so, even when events fall out of the headlines. [ . . . ] Our aim, as editors, was to put the narrative of 'the Arab Spring' back into the hands of the people without whom there would be no story to tell."