A Delicate Truth: A Novel (Paperback) 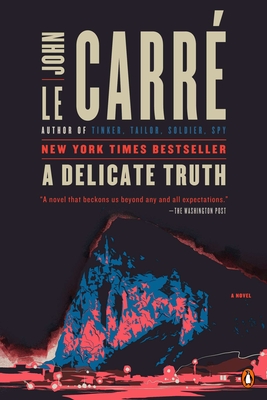 From the New York Times bestselling author of A Legacy of Spies.

"A novel that beckons us beyond any and all expectations."—Jonathan Yardley, The Washington Post

A counter-terrorist operation, code-named Wildlife, is being mounted on the British crown colony of Gibraltar.  Its purpose: to capture and abduct a high-value jihadist arms buyer. Its authors: an ambitious Foreign Office Minister, a private defense contractor who is also his bosom friend, and a shady American CIA operative of the evangelical far-right. So delicate is the operation that even the Minister’s personal private secretary, Toby Bell, is not cleared for it.

Three years later, a disgraced Special Forces Soldier delivers a message from the dead. Was Operation Wildlife the success it was cracked up to be—or a human tragedy that was ruthlessly covered up? Summoned by Sir Christopher “Kit” Probyn, retired British diplomat, to his decaying Cornish manor house, and closely observed by Kit’s daughter, Emily, Toby must choose between his conscience and duty to his Service. If the only thing necessary for the triumph of evil is that good men do nothing, how can he keep silent?

John le Carré was born in 1931. For six decades, he wrote novels that came to define our age. The son of a con man, he spent his childhood between boarding school and the London underworld. At sixteen he found refuge at the university of Bern, then later at Oxford. A spell of teaching at Eton led him to a short career in British Intelligence (MI5&6). He published his debut novel, Call for the Dead, in 1961 while still a secret servant. His third novel, The Spy Who Came in from the Cold, secured him a worldwide reputation, which was consolidated by the acclaim for his trilogy Tinker Tailor Soldier Spy, The Honourable Schoolboy, and Smiley’s People. At the end of the Cold War, le Carré widened his scope to explore an international landscape including the arms trade and the War on Terror. His memoir, The Pigeon Tunnel, was published in 2016 and the last George Smiley novel, A Legacy of Spies, appeared in 2017. He died on December 12, 2020.

“At the moment a new generation is stumbling upon his work, le Carré is still writing at something close to the top of his game…. [A Delicate Truth] is an elegant yet embittered indictment of extraordinary rendition, American right-wing evangelical excess and the corporatization of warfare. It has a gently flickering love story and jangling ending. And le Carré has not lost his ability to sketch, in a line or two, an entire character.”—Dwight Garner, The New York Times Magazine (front page)

“The narrative dominoes fall with masterly precision....As ever, le Carré’s prose is fluid, carrying the reader toward an inevitable yet nail-biting climax.”—Olen Steinhauer, The New York Times Book Review

“Le Carré is fiercely modern…a confluence of styles, voices, approaches….A novel that beckons us beyond any and all expectations.”—Washington Post

“[L]e Carré is...at full power with a book that draws on a career’s worth of literary skill and international analysis. No other writer has charted—pitilessly for politicians but thrillingly for readers—the public and secret histories of his times.”—The Guardian (UK)

“Loyalty to the crown is tested; consciences are checked; and nothing is more terrifying than, as this novel’s protagonist puts it, ‘a solitary decider’ asking himself how on earth he talked himself into this mess.”—The Daily Beast

“The dirty deeds are brutal and crude. And so is the cover-up.”—The Huffington Post

“Heady and absorbing....John le Carré remains in full command of both the craft of writing and the art of espionage.”—Christian Science Monitor

“Le Carré further establishes himself as a master of a new, shockingly realistic kind of noir.”—Booklist (Starred)

“This is a guaranteed hair-raising cerebral fright, especially for anyone who enjoyed Robert Harris’s The Ghost or who just knows his or her email account has been hacked.”—Library Journal (Starred)

“Le Carré focuses on the moral rot and creeping terror barely concealed by the affable old-boy blather that marks the pillars of the intelligence community.”—Kirkus Reviews (Starred)

“Le Carré proves himself a master of character development.”—The Millions

“Another breathtakingly good work…. [the] story hurtles along with the speed of light.”—Newsday

“The upper register of a great writer’s oeuvre. Knowledge is not power in the novel: John le Carré believes that truth, difficult and generous on its own, can also kill you.”—St. Louis Post-Dispatch

“Witty as it is insightful….A Delicate Truth is a delightful read that unnerves as it entertains.”—The Columbus Dispatch

“The master storyteller, le Carré, is still at war. His foes now are legion. But his battles, and his novels, are flooded with light and hope. He pins his faith, and that of his readers, on the fundamental decency of those most vulnerable and quirky of warriors – the average joes.”—OregonLive.com

“A career’s worth of literary skill and international analysis…..No other writer has chartered…the public and secret history of his times.”—The Guardian (UK)

“Remarkable….[A Delicate Truth] displays the mastery of the early and the passion of late Le Carré.”—Robert McCrum, The Observer (UK)

“Writing of such quality that…it will be read in one hundred years….[Le Carré] found his canvas in espionage, as Dickens did in other worlds. The two men deserve comparison.”—Daily Mail (UK)

“The tension ratchets up superbly as revelation follows on revelation….[Le Carré] is a writer of towering gifts, whose fiction appeals to a reading public both popular and serious….A talent to provoke as well as unsettle.”—The Independent (UK)