His Holiness the Dalai Lama in 100 Anecdotes (Hardcover) 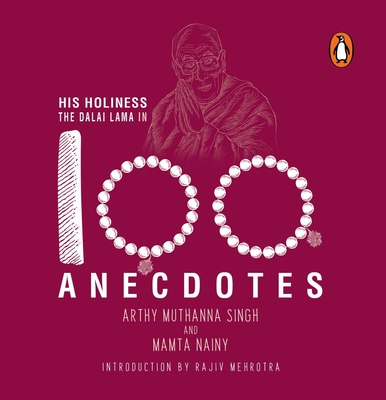 An accessible introduction for young people to the Dalai Lama.

On July 6, 1935, a mischievous boy was born in a remote village in Tibet, who, at the age of two, was recognized as the fourteenth reincarnation of the Dalai Lama. His eventful boyhood in Lhasa, thrilling escape to India and subsequent exile in Dharamsala, captured the imagination of thousands. With an endearing smile and childish humor, he has become a symbol of optimism and hope for the oppressed.

Tracing his life through 100 lesser-known and inspiring incidents, unusual trivia, and gorgeous illustrations, this one-of-a-kind book explores the Dalai Lama's vision, teachings, and philosophies. His Holiness the Dalai Lama in 100 Anecdotes is a classic tribute and a collectible edition that celebrates the various facets of an extraordinary spiritual leader from his birth through his eighty-seventh birthday.

Arthy Muthanna Singh is a children's writer, freelance journalist, copywriter, editor, and cartoonist. She has authored more than thirty-five books for children. Currently, she is a partner at Syllables27, an outfit that produces books for children on a turnkey basis for publishers and organizations that work with children.

Mamta Nainy is a children's writer, editor, and translator based in New Delhi, whose book A Brush with Indian Art won The Hindu Young World-Goodbooks Award 2019 for Best Book (Non-Fiction).