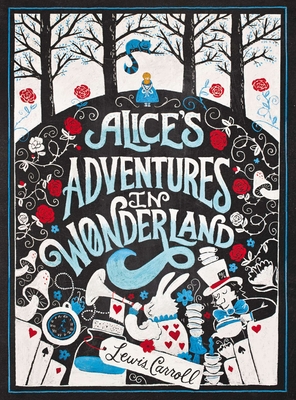 By Lewis Carroll
$7.99
On Our Shelves Now

“This illustration-driven edition of the classic tale appeals to booklovers of all ages. The perspective and design provide a satisfying experience for both the reader and the collector.”
— Camille DeBoer, Pooh's Corner, Grand Rapids, MI

When Alice follows the White Rabbit down a rabbit hole, she finds herself in an enchanted world, filled with creatures like the Mad Hatter, the disappearing Cheshire Cat, and the Queen of Hearts. Alice quickly finds out that nothing is as it seems in the wild world of Wonderland...

Lewis Carroll, born Charles Lutwidge Dodgson (1832-1898) is best known for Alice's Adventures in Wonderland, in addition to its sequel Through the Looking-Glass. He was a mathematician, deacon, and photographer in addition to being a writer.

“Publishers are having a creative field day with stunningly beautiful new covers—and lovely insides, too, in the case of Puffin’s whimsical Alice’s Adventures in Wonderland, illustrated by Rifle Paper Co.’s Anna Bond.”—Entertainment Weekly

“Chic…The pretty face of Anna Bond’s Alice looks continually astonished, and even in the scene where her neck grows freakishly serpentine, the heroine remains comely. Elegant and unthreatening, Ms. Bond’s pictures abound with so many flowers and curling vines that Wonderland seems a much nicer place than perhaps we remembered.”—Wall Street Journal

“In this beautiful, oversized, hardcover anniversary edition—with the complete, unabridged text—readers will fall in love all over again with the classic tale of the girl who fell down the rabbit hole. Illustrator Anna Bond, of gift and stationery brand Rifle Paper Co., applies her stylish, whimsical touch and distinctive color palette to Alice and her friends, from the inviting jacket and the case-cover art beneath it to the original endpapers and the superb full-color interior illustrations, large and small.” —Shelf Awareness

“This year marks the 150th anniversary of Lewis Carroll’s beloved classic, Alice’s Adventures in Wonderland. Commemorate the occasion with a deluxe hardcover edition of the tale from Puffin Books, available Oct. 27. The new book is re-illustrated with vibrant, whimsical designs by Anna Bond of Rifle Paper Co., for a one-of-a-kind look at Alice’s imaginative journey.”—American Profile