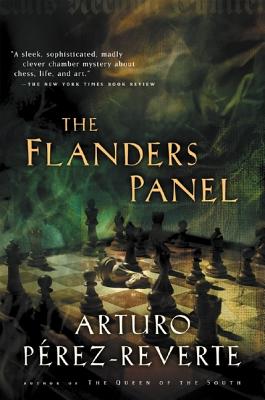 By Arturo Perez-Reverte, Margaret Jull Costa (Translated by)
$15.95
On Our Shelves Now

A fifteenth-century painting by a Flemish master is about to be auctioned when Julia, a young art restorer, discovers a peculiar inscription hidden in a corner: Who killed the knight? In the painting, the Duke of Flanders and his knight are locked in a game of chess, and a dark lady lurks mysteriously in the background. Julia is determined to solve the five-hundred-year-old murder, but as she begins to look for clues, several of her friends in the art world are brutally murdered in quick succession. Messages left with the bodies suggest a crucial connection between the chess game in the painting, the knight's murder, the sordid underside of the contemporary art world, and the latest deaths. Just when all of the players in the mystery seem to be pawns themselves, events race toward a shocking conclusion. A thriller like no other, The Flanders Panel presents a tantalizing puzzle for any connoisseur of mystery, chess, art, and history.

Arturo P+rez-Reverte is an internationally acclaimed author and his books have been translated into nineteen languages in thirty countries and sold more than three million copies worldwide. He was born in 1951 in Spain, where he still lives.

MARGARET JULL COSTA has established herself as the premier translator of Portuguese literature into English today.