In the Beginning Was the Word: The Bible in American Public Life, 1492-1783 (Hardcover) 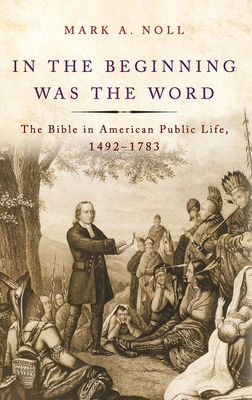 In the beginning of American history, the Word was in Spanish, Latin, and native languages like Nahuatal. But while Spanish and Catholic Christianity reached the New World in 1492, it was only with settlements in the seventeenth century that English-language Bibles and Protestant Christendom arrived. The Puritans brought with them intense devotion to Scripture, as well as their ideal of Christendom -- a civilization characterized by a thorough intermingling of the Bible with everything else. That ideal began this country's journey from the Puritan's City on a Hill to the Bible-quoting country the U.S. is today. In the Beginning Was the Word shows how important the Bible remained, even as that Puritan ideal changed considerably through the early stages of American history. Author Mark Noll shows how seventeenth-century Americans received conflicting models of scriptural authority from Europe: the Bible under Christendom (high Anglicanism), the Bible over Christendom (moderate Puritanism), and the Bible against Christendom (Anabaptists, enthusiasts, Quakers). In the eighteenth century, the colonists turned increasingly to the Bible against Christendom, a stance that fueled the Revolution against Anglican Britain and prepared the way for a new country founded on the separation of church and state. One of the foremost scholars of American Christianity, Mark Noll brings a wealth of research and wisdom to In the Beginning Was the Word, providing a sweeping, engaging, and insightful survey of the relationship between the Bible and public issues from the beginning of European settlement. A seminal new work from a world-class scholar, this book offers a fresh account of the contested, sometimes ambiguous, but definite biblical roots of American history.

Mark A. Noll is the Francis A. McAnaney Professor of History at the University of Notre Dame and author of numerous books, including America's God: From Jonathan Edwards to Abraham Lincoln (OUP 2002) and Protestantism: A Very Short Introduction (OUP 2011).