Friction: How Conflict Radicalizes Them and Us (Paperback) 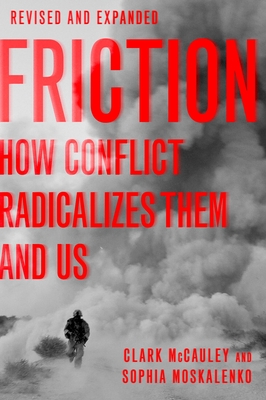 Terrorism is an extreme form of radicalization. In this ground-breaking and important book, Clark McCauley and Sophia Moskalenko identify and outline twelve mechanisms of political radicalization that can move individuals, groups, and the masses to increased sympathy and support for political
violence. Co-authored by two psychologists both acknowledged in their field as experts in radicalization and consultants to the Department of Homeland Security and other government agencies, Friction draws on wide-ranging case histories to show striking parallels between 1800s anti-czarist terrorism, 1970s
anti-war terrorism, and 21st century jihadist terrorism. Altogether, the twelve mechanisms of political radicalization demonstrate how unexceptional people are moved to exceptional violence in the conflict between states and non-state challengers. In this revised and expanded edition, McCauley and Moskalenko use the twelve mechanisms to analyze recent cases of lone-wolf terrorists and illustrate how individuals can become radicalized to jihadist violence with group influence or organizational support. Additionally, in the context of the
Islamic State's worldwide efforts to radicalize moderate Muslims for jihad, they advance a model that differentiates radicalization in opinion from radicalization in action, and suggest different strategies for countering these diverse forms of radicalization. As a result, the authors conclude that
the same mechanisms are at work in radicalizing both terrorists and states targeted by terrorists, implying that these conclusions are as relevant for policy-makers and security officers as they are for citizens facing the threat of terror today.

Clark McCauley is the Rachel C. Hale Professor of Sciences and Mathematics and Co-Director of the Solomon Asch Center for the Study of Ethnopolitical Conflict at Bryn Mawr College. He received his Ph.D. in social psychology from the University of Pennsylvania in 1970. With Dan Chirot, he co-authoredWhy Not Kill Them All? The Logic and Prevention of Mass Political Murder, published by Princeton University Press in 2006. He is the founding editor of the journal Dynamics of Asymmetric Conflict: Pathways toward Terrorism and Genocide. Sophia Moskalenko is a Postdoctoral Research Fellow at the National Consortium for the Study of Terrorism and Responses to Terrorism (NC-START) and a consultant with the Oak Ridge National Laboratory in Oak Ridge, Tennessee. She received her Ph.D. in social psychology from the University ofPennsylvania in 2004. Her research and publications have focused on group identification, political activism, radicalization, and terrorism.