The Wealth of a Nation: A History of Trade Politics in America (Hardcover) 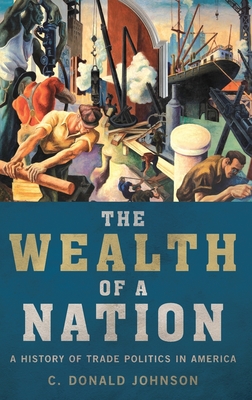 The United States is entering a period of profound uncertainty in the world political economy--an uncertainty which is threatening the liberal economic order that its own statesmen created at the end of the Second World War. The storm surrounding this threat has been ignited by an issue that has divided Americans since the nation's founding: international trade. Is America better off under a liberal trade regime, or would protectionism be more beneficial? The issue divided Alexander Hamilton from Thomas Jefferson, the agrarian south from the industrializing north, and progressives from robber barons in the Gilded Age. In our own times, it has pitted anti-globalization activists and manufacturing workers against both multinational firms and the bulk of the economics profession. Ambassador C. Donald Johnson's The Wealth of a Nation is an authoritative history of the politics of trade in America from the Revolution to the Trump era. Johnson begins by charting the rise and fall of the U.S. protectionist system from the time of Alexander Hamilton to the Smoot-Hawley Tariff of 1930. Challenges to protectionist dominance were frequent and often serious, but the protectionist regime only faded in the wake of the Great Depression. After World War II, America was the primary architect of the liberal rules-based economic order that has dominated the globe for over half a century. Recent years, however, have seen a swelling anti-free trade movement that casts the postwar liberal regime as anti-worker, pro-capital, and--in Donald Trump's view--even anti-American. In this riveting history, Johnson emphasizes the benefits of the postwar free trade regime, but focuses in particular on how it has attempted to advance workers' rights. This analysis of the evolution of American trade policy stresses the critical importance of the multilateral trading system's survival and defines the central political struggle between business and labor in measuring the wealth of a nation.

C. Donald Johnson is Director Emeritus of the Dean Rusk International Law Center at the University of Georgia School of Law, where he was on the faculty for eleven years and taught international trade law in China and Geneva. From 1998 through 2000, as an Ambassador in the Office of United States Trade Representative, he served as the Chief Textile Negotiator during the negotiation of U.S.-China WTO Accession Agreement. From 1993 to 1995, he represented the 10th district of Georgia as a Member of Congress, where he focused on national security and international economic policy, including NAFTA and the WTO implementing legislation. Johnson also served in the Georgia State Senate from 1987 to 1992, where he was chairman of the Appropriations Committee. He served on the trade staff of the U.S. House of Representatives Ways and Means Committee during consideration of the Trade Act of 1974. He holds a Master of Laws degree from the London School of Economics.