With Stars in Their Eyes: The Extraordinary Lives and Enduring Genius of Aden and Marjorie Meinel (Hardcover) 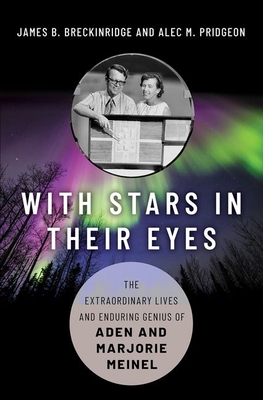 
This book details the lives of two married geniuses, Aden and Marjorie Meinel, who helped to pioneer modern optics and solar energy in the U.S. Aden B. Meinel and Marjorie P. Meinel stood at the confluence of several overarching technological developments during their lifetimes, including postwar aerial surveillance by spy planes and satellites, solar energy, the evolution of telescope design, interdisciplinary optics, and photonics. Yet,
their incredible stories and their long list of scientific contributions have never been adequately recognized in one place. In this book, James Breckinridge and Alec M. Pridgeon correct this oversight by sharing the story of this powerful duo. The book follows their lives and covers large scientific developments between World War II to the Cold War. James B. Breckinridge, a previous advisee and later colleague to the Meinels, and historian and scientist Alec M. Pridgeon collected more than 200 hours of oral interviews with those who
worked closely with the Meinels and some who built their careers around the findings made possible by their work. The book shares and analyzes the work done by the Meinels, and it also includes incredible insights from an unpublished Meinel autobiography.