The Philippines: What Everyone Needs to Know (Hardcover) 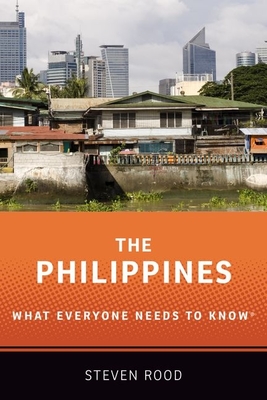 Since the colonization of the Philippines by Spain in the sixteenth century, the island archipelago has been at the center of global trade flows. And from its status as the main base of Spain's Pacific galleon trade to its conquest centuries later by late-arriving imperial powers like the
United States and Japan, it has been a focal point of economic and military rivalry too. Decolonized in 1946, this enormously diverse country is ruled today by a classic modern authoritarian, Rodrigo Duterte, and is embroiled in a series of as-of-yet minor disputes with the East Asia region's
rising superpower, China. As it has globalized, its population has migrated across the world too, and Filipino now comprise the second-largest population of Asian-Americans in the United States. In The Philippines: What Everyone Needs to Know(R), Steven Rood draws from more than 30 years of residence in and study of the Philippines in order to provide a concise overview of the nation. Arranged in a question-and-answer format, this guide shares concise, nuanced analysis and helps readers find
exactly what they seek to learn about Filipino geography and geology, history, culture, economy, politics through the ages, and prospects for the future. This book is an ideal primer on an enormously diverse country that has been and will likely remain a key site in world affairs.

Steven Rood is Fellow-in-Residence at Social Weather Stations in Manila, and Visiting Fellow at the Australian National University, formerly Philippine Country Representative for The Asia Foundation and Professor of Political Science at the University of the Philippines-Baguio.